This is one of the great aesop tales for kids to read. Once upon a time in a jungle full of various kinds of trees, lived many bees and beetles. At first, they were not too fond of each other. They hardly ever talked. But as many years passed by, they came to know each other. And quite soon, both the bees and the beetles became good friends.

The bees resided in a huge tall tree. On the topmost branch, which was way too far for many animals to reach, they made their beehive there. All year round the bees collected nectar and made honey, storing it in their beehives. Also, read The Bear And The Bees. 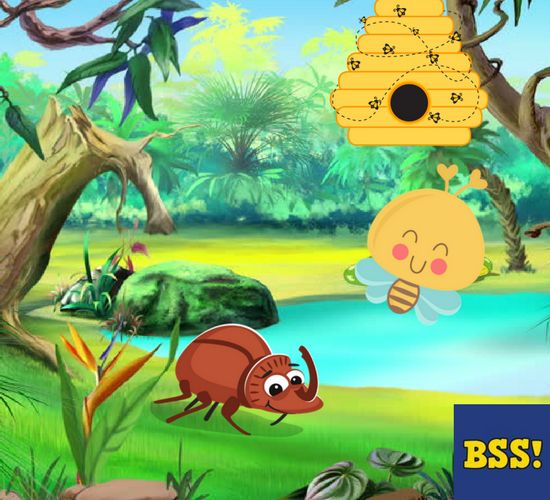 Even though the beetles and the bees were extremely different, they made good neighbors. They hardly fought, and they lived in peace and harmony. Many days passed by when suddenly the bees thought of inviting the beetles for dinner.

“They have been such great neighbors to us, we should definitely invite them for dinner,” the bees decided. “To thank them, we should serve the best honey we have and make them comfortable!” And so, the beetles were invited for dinner. The beetles showed up right on time.

Soon after the beetles arrived the dinner was served. “For tonight’s dinner, we bring you the best honey we have!” the bees said in unison. But the beetles never did eat honey, so they barely managed to eat anything. You may also like to read, The Queen Bee.

The next day, the beetles too decided to invite the bees to show them their gratitude. “The best dung we have shall be served for them”,  they decided. And when the bees arrived, the dung was served. Now, bees were extremely offended. They did not like the smell of the dung and left without touching anything. Ever since then, the bees and beetles have not invited each other for dinner. Though, they continued to be good neighbors.

MORAL OF AESOP TALES: WHEN CONFRONTED WITH DIFFERENT CULTURES, WE SHOULD BE POLITE AND RESPECTFUL.

Show Us Some Love