The Beggar And The Miser

This is one of the best short stories in english with moral for kids. Once, long ago, an old, tired beggar came to a village. The village was very rich. It had flocks of sheep, herds of cows and fields of grains. There were beautiful houses and people dressed in fine clothes. The beggar thought, “This would be a good place for me to beg.” And so he went to the richest-looking mansion in the village.

The walls were made of gold and the roof was made of rubies. It had statues made of silver and a carriage with 12 white horses was in front. So the beggar knocked on the front door and he waited, and he waited, and he waited. Finally, an old man dressed in robes as costly as a king’s answered the door, “What do you want?” The beggar pleaded, “Please! You are s rich and I am so poor. Could you not spare some meat or milk?” The old man yelled, “Not on your life! I don’t have any meat or milk! And he slammed the door on the beggar’s face.” Also read, The Boy and the Cashew Nuts. 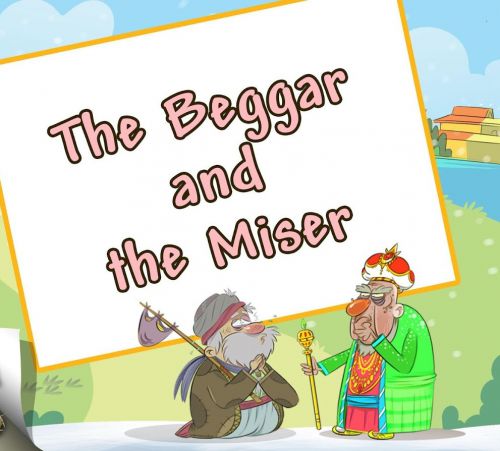 The beggar knocked again for he was very hungry. “Please, kind sir! Even a piece of bread and I’ll be grateful,” the beggar cried. The old rich man just yelled through the door, “I don’t have any bread, GO AWAY!” But the beggar kept knocking, and knocking, and knocking. Finally, the rich man opened the door again. The beggar humbled himself, bowing low, face to the ground, “At least give me some water! I am very thirsty!” But the rich man wouldn’t even give him that. “I don’t have water!” screamed the rich man.

At that, the beggar stood up and put his arm around the rich man. “Oh my poor man, why are you sitting here? Come, I will help you start begging food from the villagers, for you are even poorer that I am!”

MORAL: IF YOU ARE SELFISH AND DO NOT HELP OTHERS, THE SAME WILL HAPPEN WITH YOU.

Here is a visual depiction of one of the best short stories in english with moral for kids, “Story”. See the video story below,

Tagged with: short stories in english with moral