The Blind Man And Advertising Story

No one was giving him any money. A young advertising writer was passing from the same street and saw a blind man with a sign board and an empty tin cup. She also noticed that there are many people who are passing by without noticing the old man. She felt bad for the blind man and wanted to help him. Also, read The Blind Man And The Lame Man. 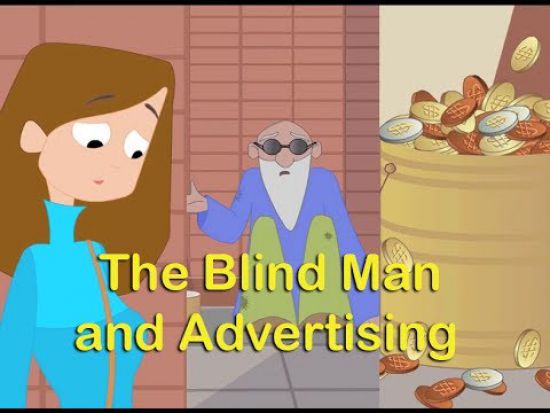 The Advertising writer thought for a while and soon she got an idea. She took out her thick marker pen from her pocket, turned the cardboard sheet from back to front and rewrote the sign board. She put some money in the tin cup and went on her way.

In no time, people began putting money into the tin cup. After a while, the old man realized that his tin cup was filling very fast. When the tin cup was overflowing, the blind man asked a stranger, “Can you read this sign board for me?” The stranger was a good man and so he agreed to read it. The stranger read, “It says, ‘IT’S A BEAUTIFUL DAY, YOU CAN SEE IT! I CANNOT!'” You may also like to read, The Blind Man With A Lamp.

This story depicts in a timeless way how important choice of words and language is when we want to truly connect with and move other people.

MORAL OF THE STORY: WORDS CVAN INSPIRE AND WORDS CAN DESTROY. CHOOSE YOUR WORDS WISELY.

Here is a short visual depiction of one of the short inspirational stories for kids “The Blind Man And The Advertising“. See the video story below,