This is one of the best panchtantra stories for kids. Once upon a time, a jackal was roaming around in search of food. It was an unlucky day for him. He could not get a single bite to eat. Tired and hungry, he walked until he reached a town. He knew it was not safe for him to stray into the town. But, the poor jackal was desperate. He had to get something to eat or he would starve to death.

When he was walking about inside the town, he saw some food strewed on the side of the road. The jackal quickly ran and began eating. Suddenly, some dogs noticed him and began barking. The jackal ran away but the dogs chased him to the house of the washerman. The washerman was busy in dying a set of clothes blue. So, he had a whole tub of blue dye ready. The jackal didn’t see the tub and tumbled into it. 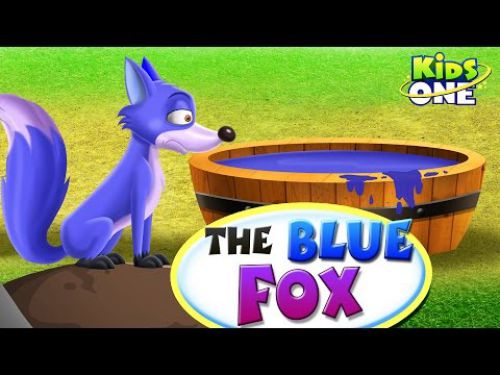 In the forest,all the animals ran away when they saw him. None of one has seen such a strange blue creature ever before and they were all frightened. But, the jackal was quite clever. He decided to take advantage of this situation. The jackal told the animals that he has been sent by the god to protect all the animals. All the animals got influenced by him and decided to obey him and tried to keep him happy. They brought him food and water. The jackal did not have to worry about anything.

Every evening, the jackal would sit on the top of the rock with all the animals sitting around him. He would tell them stories and tales. All the animals loved their leader. One evening, when jackal was telling them stories, he heard a pair of jackals howling. The jackal had not seen or heard other jackals for a very long time. When he heard them howling, he was overjoyed and began howling too.

That was when all the animals realized that their ruler was an ordinary jackal. They all began to chase him. But the jackal was already far away from them running as quickly as he could.

MORAL: THE ONE WHO ABANDONS ONE’S OWN FOLK WILL PERISH.

Here is a short visual depiction of the best panchtantra stories, “The Blue Jackal“. See the video story below,