The Boy and The Cashew Nuts

This is one of the best short stories for kids in english.  There was a boy who liked cashew nuts very much. So, his mother always gave him a few nuts to eat. But he was never satisfied and always asked for more and more. His mother would say, “No dear! If you eat too many at a time, your stomach will be upset.” You may also like, The False Friend.

One day, the boy was alone at home. He picked up the jar of cashew nuts. He ate up as many cashew nuts as he could. He was really happy that there was no one to stop him and scold him. So, he ate, and he ate, and he ate till his mother knocked at the door. He quickly hid the jar and opened the door and went asleep. 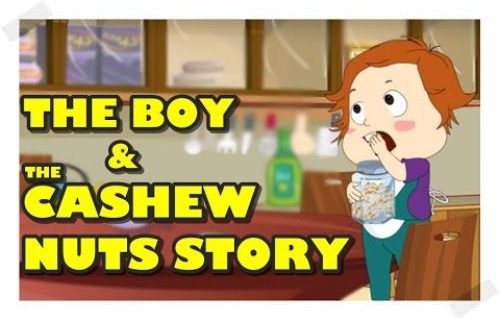 The next day, his mother came to know what had happened in her absence and got very angry. On the other hand, the boy had a pain in his stomach. He burst into tears and bitterly sobbed in disappointment. He felt sorry for not obeying his mother. He never disobeyed his mother from that day. Also read, The Fighting Fingers.

MORAL: TOO MUCH GREED WILL NOT BRING SUCCESS.

Here is a visual depiction of one of the best short moral stories in english, “The Boy and the Cashew Nuts”. See the video story below,