The Boy And The Drum

This is one of the cute short bedtime stories for kids. There once was a poor woman who had a son. He was a good boy, always willing to help his mother out in any way he could. It was not an easy life but they had each other. So, the boy didn’t mind that his clothes were torn and he had few toys. The boy had a secret wish. He had always wanted a drum.

One day, when his mother was going to the village to sell some of their grains, she asked, “Is there anything you would like from the market?” The boy thought and said, “All I would really like is a drum. I know you can’t get me one but that’s what I want most of all.” The poor woman thought of her son all the way home from the market and was sad she couldn’t get him the one thing that he really wanted. Also, read An Honest Boy. 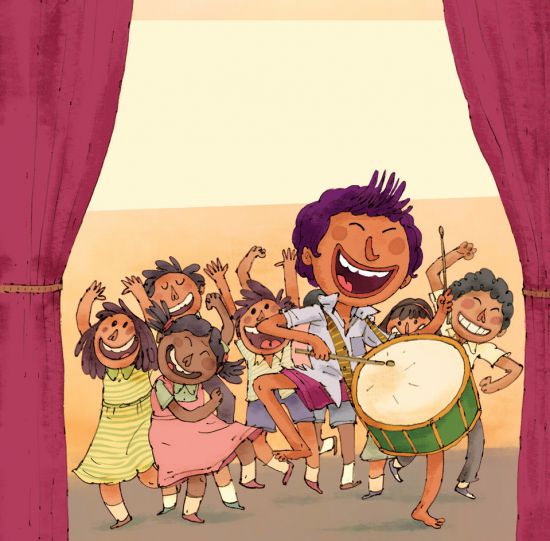 She started to cry to herself as she walked home. Not seeing where she was going, she almost fell over a strange little man sitting by the side of the road. “Why are you crying?” asked the strange little man. The woman told him her problem. The man gave her a piece of wood and said, “Maybe your boy would like this stick. It may have some magic in it!” “It is not much but perhaps my good son can find a use for it,” she thought.

The boy didn’t know what to do with the stick when his mother gave it to him. She told him what the strange little man had said. He thanked her and went out to play.

On the road, the boy could see an old woman by a cook stove. The woman wanted to to light a fire so she could cook bread. The wood was too new and would not catch fire. Lots of smoke hung around her. Her eyes were wet and the boy asked why she was crying. “I can’t get my fire to burn,” said the woman. “Here,” said the boy, giving her his stick, “Perhaps, this will work. My mother told me this stick has some magic in it and maybe there’s enough magic to start your fire!” The old woman started the fire. She thanked the boy giving him some bread that she cooked on her stove. You may also like to read, Wise Totum.

The boy took the bread and walked on until he met another woman who was the wife of the village potter. A small child was in her arms but the child was crying loudly and would not stop. The boy spoke up so he could be heard. “Why is your child crying?” he asked. The potter’s wife answered, “He’s hungry. We have nothing for him to eat.” The boy looked at the bread he was holding in his hand. Then, gave to the hungry child. As thanks, the happy mother gave the boy a large pot.

The boy came to a river where he a man and woman yelling. “Why are you yelling?” asked the boy. “I’m a washerman,” the man replied, “and my wife has just broken the only pot I had to boil clothes in. I’ll never get the clothing clean now.” The boy knew he could help the man and he gave them his pot.. “Thank you very much,” the washerman said. And he gave the boy a coat for being so nice.

The boy walked on until he came to a man with a horse on the road. The man  wore sandals on his feet and was only wearing underwear. His hair was wet and he was shivering. The boy asked, “What happened to your clothes and why are you all wet?” “I was on my way to visit my family when a robber rode up to this horse,” the man replied. “He said I must give him my best clothes and money. Then, he pushed me in the river.” The boy handed the man the coat that the washerman had given him. The man put on the coat and said, “Please, take this horse. I have no use for it!” Also, read The Seven Ravens.

The boy took the horse and kept walking down the road. He came to a wedding party made up of the bridegroom, his family and some musicians with their instruments. But there was no music. They were all seated in the shade of a small tree and they looked very unhappy. “Why do you all look so sad?” the boy asked. “The father of the bridegroom spoke up, “We’re waiting for the man who is bringing the horse my son will ride. He’s very late and if my son can’t ride the horse during the wedding march, his marriage will have bad luck!”

The boy listened to the story and decided to give bridegroom the horse. “You saved the day,” the groom exclaimed. The groom spoke to his father and one of the musicians. Then, he handed the boy a drum, “Please, take this drum with all our thanks.” The boy’s face lit up with joy. “Oh, thank you! It’s what I always wanted,” said the boy.

The boy ran all the way home as fast as he could. He could not wait to show his mother that the strange little man was right. That old piece of wood did have a magic after all. You may also like to read, The Boy In The Paper Boat.

Here is a short visual depiction of one of the cute short bedtime stories “The Boy And The Drum“. See the video story below,