The Boy in the Paper Boat

This is one of the great adventure stories in English for kids. Once upon a time, there lived a boy called Jack. Now, little Jack was very fond of boats. His favorite pass time had become folding papers into boats. Jack could fold any kind of paper into boats. Any kind of paper, Jack could fold it into pretty boats. Be it newspapers, magazine paper, wrapping papers. And even paper towels!

One day, Jack made the most beautiful boat he had ever made. The paper he used, had a shiny texture. There were words written all over it. And had many, many pictures all over it. He folded the paper into the most magnificent boat. The sail of the boat, was truly the biggest and the tallest of all Jack had seen on a paper boat. Upon being done with it, little Jack put the paper boat on the table next to his bed and went to sleep. You may also like to read, Long, Broad And Sharpsight. 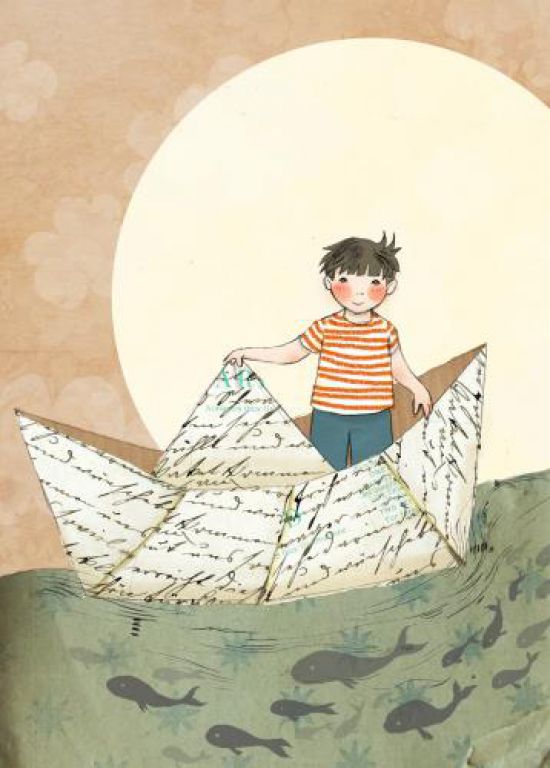 Image Source@ in.pinterest.com. As Jack slept, he woke up in the middle of the night. Strange noises filled Jack’s ears. All of them were coming from the little paper boat. Soon, the paper boat had a paper crew and a captain with a blue hat. Jack could hear the captain scream orders. “Let loose the stern lights.” Then the captain yelled again, “Sailors, prepare to sail.”

Little Jack shot out of his bed and said, “Hey where are you going with my boat?” “Then climb aboard,” the captain told the boy. And then, Jack realized that his room had turned into an ocean and his boat was about to set sail. After Jack stepped into the boat, the paper boat swiftly slid on the water and slid across the bedroom.

Soon, the paper boat had found its way onto the main road, just across the supermarket. As the paper boat sailed, Jack saw the world whizz by. Just as Jack was watching the world go by, he asked the captain that “Do you think we could sink after the boat becomes soggy?” To which the captain smiled. Then he said, “Oh no, my boy. This boat is made out of the toughest material for the paper boats!”

“Okay,” replied Jack. Again he had a question. “But where are we going?” asked Jack. “We are going to catch the pirates, little boy,” replied the captain. “There are pirates, in the parking lot of the shopping mall!” As the paper boat neared the parking lot, Jack could hear a roaring sound. He became scared. Up ahead Jack saw the mouth of a drain. Also, read Treasure Island.

As the boat neared, the boat got sucked in and sailed down a pipe and went straight to the parking lot of the shopping mall! The parking lot had turned into a vast sea. “Pirates! They are here! The Pirates!” yelled the sailors on the boat.

When Jack turned he saw the deadliest looking boat approach. A huge boat with big yellow sails. Jack could see the paper pirates swinging their swords. A fierce battle took place. Alongside the sailors, Jack fought bravely! Like a true hero Jack fought. And when the pirate boat sunk with many holes, the sailors and Jack yelled “Hooray, we won!”

Soon after, Jack and the paper boat went back to Jack’s bedroom. There Jack wished the sailors a good luck and went to sleep. Unfortunately, Jack never met the paper boat’s captain and sailors again. Although, he kept the boat by his bed each night thereafter. All in the hopes, that some day, he might wake in the night and have another adventure. You may also like to read, Gulliver’s Travel Summary.

Here is a visual depiction of one of the adventure stories in English, “The Boy In The Paper Boat”. See the video story below,