The Brahmin And The Crooks

This is one of the funny English Panchatantra stories for kids. Once upon a time, a Brahmin received a goat as a present. So, he decided to carry the goat on his shoulders. The Brahmin decided to take the shortest route home, which went through a forest.

While the Brahmin carried the goat, three robbers saw the Brahmin and the goat. These robbers were hungry. And looking at the plump goat, they grew even hungrier. They hatched a plan together and went to see the Brahmin. You may also like to read, The Foolish Weaver. 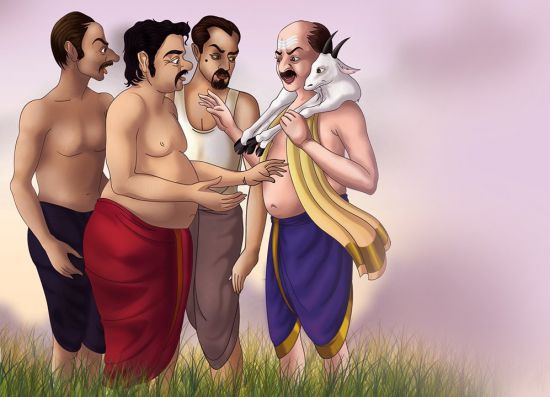 Image Source@ www.youtube.com. One of them went to the Brahmin and said, “What is this? A Brahmin carrying a dog? This is surely an unholy sight!” The Brahmin became angry. “Dog? Are you blind? This is a goat. I just received it as a present.” The robber replied, “Don’t get angry at me. I tell you what I see and I see a dog.” The robber quickly went away.

Soon, the robber came to see the Brahmin. This time, the robber said, “Holy sir, I must say that it disgraceful for a holy man such as yourself to carry a dead animal on your shoulders.” “What dead animal? Are you blind? This is a goat, a living breathing goat!” the angry Brahmin shouted. “Don’t angry with me, holy sir. Carry a living or a dead animal, it doesn’t make much of a difference.”

“Don’t angry with me, holy sir. Carry a living or a dead animal, it doesn’t make much of a difference,” saying that, the second robber left. The Brahmin continued to walk. But he had become worried. He looked over his shoulders to check. The Brahmin saw a goat. He wondered what those men were talking about.

Walking further, the Brahmin met the third robber. “Sir, I must say what you’re doing is utterly disgraceful.” The brahmin gave the robber a puzzled look. “Why are you carrying a donkey, holy sir?” “What donkey?” asked the confused Brahmin. “You are carrying a dirty donkey on your shoulders, sir.”

The Brahmin was too worried to think about anything. He had met three men and all three of them had mistaken the goat as something else. So, he hurled on the ground and ran away. Was it a Demon that could change shape every now and then. Who knew, all the Brahmin cared about was getting away from it. So, he ran as fast as he could leaving the goat behind.

The three robbers took the goat and happily returned home. They were pleased that their plan worked! You may also like to read, The Story Of The Potter.

Here is a short visual depiction of one of the funny English Panchatantra stories “The Brahmin And The Crooks“. See the video story below,