This is the Brave Little Tailor story. One summer’s morning, a little tailor was sitting at his table by the window. He was in good spirits and sewed with all his might. Then came a peasant woman down the street crying, “Good jams, cheap!” This rang pleasantly in the tailor’s ears, he stretched his gentle head out of the window and called out, “Come over here, dear woman, I’ll buy a jar!” “Now this jam will give me strength and health!” cried the little tailor so he brought the bread out of the cupboard, cut himself a piece right across the loaf and spread the jam over it. “Now let me just finish this jacket before I take a bite,” he said as he laid the bread near him and sewed the jacket. More about The Brave Little Tailor.

In the meantime, the smell of the sweet jam attracted some flies. He attempted to drive the unbidden guests away. The flies came back again in the bigger number. The little tailor, at last, lost all his patience and drew a piece of cloth from his work table and said, “I’ll get you!” struck them mercilessly. When he drew the cloth away and counted, there lay before him seven flies dead, with legs stretched out. The tailor looked at the flies that he had killed and could not help admiring his own bravery. “The whole town shall know of this!” he said. He hastened to cut himself a belt, stitched it and embroidered on it in the large letters, “SEVEN DEAD AT ONE STROKE!” “Now the whole world shall hear of this!” he exclaimed. Also read, The Little Match Girl Story. 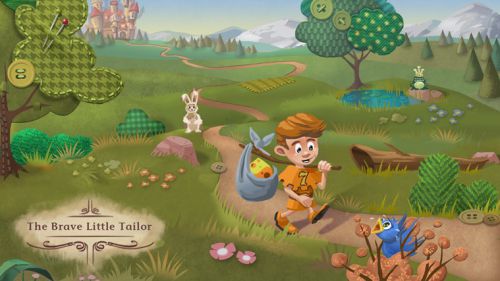 The tailor put on the belt and decided to go on an adventure to show off his bravery. Before he went away, he looked around the house to see if there was anything that he could take with him. However, he found nothing but an old cheese which he put in his pocket. In front of the door, there was a small bird, so he also decided to take the bird in his pocket. Then he hit the road which led him up the mountains. When he had reached the highest point of it, he saw a powerful giant looking at him. The giant had been haunting the village for years. The little tailor bravely said, “Good day comrade! How are you?”

The giant looked contemptuously at the tailor and said, “How dare  you talk to me, you miserable creature!” The brave little tailor unbuttoned his coat and showed the giant the belt. “There may you read what kind of man I am,” the tailor said. The giant read, “Seven dead at one stroke” and thought that they had been the giants whom the tailor had killed, and he began to fear a little fear for the tiny fellow. You may also like, The Three Bears and Goldilocks.

The giant took a stone in his hand and squeezed it tightly so that only little pieces of it remained. “Do you have the strength to do that?” asked the giant. He put his hand into his pocket, brought out the soft cheese, and pressed it until the liquid ran out of it. The giant saw that well and thought the tailor just turned a stone into water. Then the giant picked up a stone and threw it so far that the eye could scarcely follow it. “Now little man, do it!” the giant said. So, the tailor put his hand into his pocket, took out the bird, and threw it into the air. The bird, delighted with its liberty, rose, flew away and didn’t come back. The giant was impressed and said, “You can certainly throw but now we will see if you are able to carry a tree!”

The giant was impressed and said, “You can certainly throw but now we will see if you are able to carry a tree!” He took the little tailor to a mighty oak tree which lay there felled on the ground and said, “If you are strong enough, help me to carry the trunk out of the forest!” “Let’s do it! You take the trunk on your shoulders and I will raise up the branches and twigs; after all, they are the heaviest,” answered the little man. The giant took the trunk on his shoulder, but the tailor just sat on the branch and the giant who couldn’t look around carried away the whole tree while the little tailor relaxed and whistled.

The giant said, “If you are such a great fellow, come with me into my cave and spend a night.” The tailor was willing and followed him. When they went into the cave, other giants were sitting there by the fire, and each of them had a roasted sheep in his hand and was eating it. The brave little tailor looked round and thought, “It is much more spacious here than in my workshop!” The giant showed him a bed and aid him to lie down in it and sleep. The bed, however, was too big for the little tailor. He didn’t lie down in it but crept into a corner.

Here is a visual depiction of , “The Brave Little Tailor Story”. See the video story below,