This is one of the folktale stories for kids. A long time ago lived a wise man in a distant land. He was known by his people as Bharat, the brilliant negotiator. If there was any issue to be resolved, the people would say, “Go to Bharat. He is the best negotiator.” Bharat lived a simple and happy life.

One day, the Goddess of Wealth and the Goddess of Poverty had an argument about who was the most beautiful. They kept arguing day in and day out. They went to the King of Gods but he was unable to solve their problem. Finally, he said, “I hear, there is a brilliant negotiator called Bharat in the village below. Why don’t you go to him? He will resolve this issue!” Also, read The Unwanted Guests. 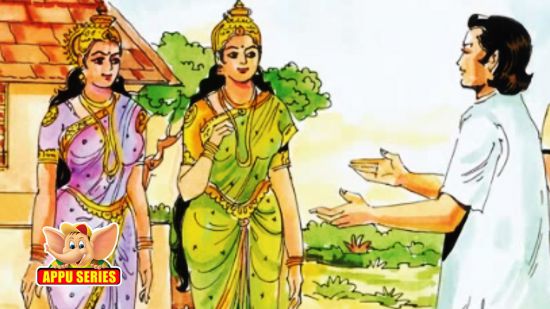 Image Source@ www.youtube.com. Both the Goddess agreed and they went to Bharat’s house. He wasn’t home when they reached there and so they decided to wait for him. As they waited, they once again began arguing. They made so much noise that people gathered around them. The Goddess of Wealth smiled at them and asked, “Well, my dear people, can any of you tell us which one of us is more beautiful?”

The people were scared. If they favored one, the other would get upset. They were in quite a fix but suddenly to their delight, they saw Bharat returning home. “Bharat, you’re back!” they shouted in happiness. Bharat rushed to find out what the commotion outside his house was all about. “What is it? What is the problem?” he asked.

The Goddess of Wealth said, “We heard that you can solve any problem. You must be a clever man.” “Don’t you go flattering him! He won’t answer in your favor just because of your flattery. He’s a fair man,” snapped the Goddess of Poverty at her. “Will someone please tell me what the problem is?” he asked. You may also like to read, The Wizard And The Mouse.

Then, one of the villagers stepped forward and said, “These two Goddess are arguing about who is more beautiful. They want you to be the judge.” Bharat was shocked. He was quite in a fix now. He knew if he said one was more beautiful, the other would be very angry and curse him. “Oh, dear! What am I going to do?” he thought.

He looked at both the Goddesses and an idea struck him, “Well, Goddess of Wealth, there is no one as beautiful as you are in the whole universe when you enter the house.” He continued, “Goddess of Poverty, there is no one quite as beautiful as you when you are leaving the house!” This answer pleased the Goddesses and they went away, each of them thinking themselves to have been adjudged the most beautiful.

Bharat breathed a sigh of relief and the villagers shouted, “Three cheers to Bharat, the brilliant negotiator! There is no one quite like him!”

Here is a visual depiction of one of the folktale stories, “A Brilliant Negotiator”. See the video story below,