The Brother And The Sister

This is the best fable story with moral lesson for kids. A father had a son and a daughter. The twins looked alike, except for the large, red birthmark on the daughter’s cheek. It happened one day that the mother had left her mirror sitting on a chair. Brother looked in the mirror. “Ah, how beautiful I am!” he said. “My skin is so smooth and perfect!”

Sister looked in the mirror and screamed, “Ah, how ugly I am. My skin is rough and red!” She hated the big, red birthmark on her cheek. Brother went on and on about how beautiful he looked. Sister felt ugly and angry. She ran up to the mirror and smashed it! You may also like to read, A Father And His Two Daughters. 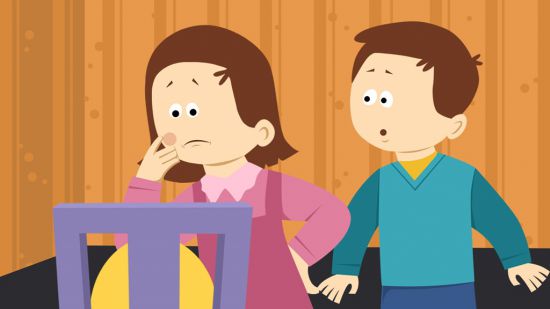 Brother said, “Sister broke mother’s mirror. She’s so mean!” Sister hid outside in the chicken coop. Father helped Brother see why Sister was so mad. Brother felt bad. “Can we buy Sister a mirror that will help her see her true beauty?” “That’s a good idea!” said Father. They went to the market where many people were selling their wares.

Brother ran into the house. “Look sister, a new mirror!” “i don’t want a new mirror,” she cried. “Take it back!” “But this one is enchanted!” Sister looked in the mirror and couldn’t see anything, not even her own reflection. “The mirror doesn’t work! It’s broken!” said Sister. Also, read The Good Brother.

Just then, the monkey jumped out of the sack. “Ee, Ee, Ee! Can’t catch me!” he screeched, as he ran from table to chair. Brother and sister chased the monkey all around the room. The naughty monkey hid behind the couch and wouldn’t come out! Sister gave the monkey a banana! He jumped out of his hiding place,plopped on the couch and stuck the banana in his ear. Brother and sister laughed, “Silly monkey!” “We better get him back to the old peddler!” said Brother.

“Wait a minute! Look!” said sister. They stared at the monkey who was laughing at himself in the mirror. “He-He-He! Silly me!” “What’s so funny?” Sister looked into the mirror but she could only see her own reflection. Sister saw herself giving her doll to a friend who didn’t have one. She saw herself mending a bird’s broken wing. She saw herself giving the baker back his money when he gave her too much change.

Then, something magical happened. Sister saw her face. The very first thing she once thought was ugly now looked beautiful. “Sister is glowing!” Father, Mother, and Brother embraced Sister. “The beautiful things you do are good and true, and the beauty that you are shines through,” they said. “Oo-Oo! So true!” agreed monkey. “Get that monkey,” said Brother. They all chased monkey right back to the old peddler woman who was very happy to see him. You may also like to read, The Old Man And His Sons.

So, it is that Brother learned of his true beauty by helping his Sister discover hers. Sister learned that true beauty isn’t how you look, it is who you are! As for the monkey, some say he is still in the village dancing with the enchanted mirror.

MORAL OF THE STORY: GOODNESS, TRUTH AND BEAUTY SHINE OUT FROM WITHIN.

Here is a short visual depiction of the fable story with moral lesson “The Brother And The Sister“. See the video story below,