The Buck And The Doe

This is one of the awesome animal stories for kids with morals. Once upon a time, there lived a lovely Doe in the forest. The forest was situated near the mountainous area. She had extremely soft reddish brown fur and white bright eyes. One day, she was grazing in the forest when a young mountain Buck saw her and fell in love with her. He started following the Doe day and night. Also read, Never Trust A Stranger.

One fine day, he followed the Doe to the village despite being warned up the possible dangers. He became totally blind in her love. But the love-struck Buck did not pay any heed. After walking a few steps, the Doe sensed that a man was hiding ahead. Fearing that there could be a trap nearby, she let the Buck go first. 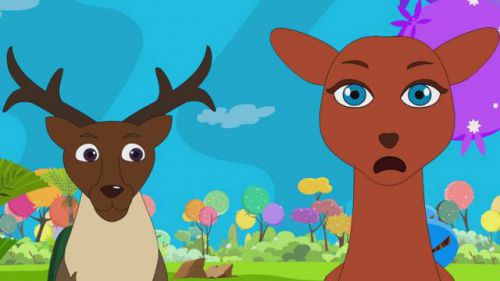 The Buck moved forward and he was continuously staring at the Doe. He did not notice the man who was standing behind the tree. Unfortunately, there was a trap and the hunter killed the Buck. It was his blind love for the Doe that killed him.

MORAL: BLIND LOVE GIVES THE FALSE FEELING OF HAPPINESSAT FIRST, BUT LEADS TO SADNESS IN THE END.

Here is a visual depiction of one of the animal stories for kids with morals, “The Buck And The Doe Story”. See the video story below,