The Bull And The Calf

This is an awesome short fable story for kids. A few years ago, there was a strong and hefty body bull. It was quite a task for him to get himself through the door of the cowshed where he and his fellow cows lived together. Whenever the cows saw bull struggling to get through the door of the shed, an automatic smile would come over their face. Also, read Cock A Doodle Doo.

“Look at him! There he goes struggling. His daily routine starts with a struggle. How strange!” said one of the calves. “Why can’t I get myself out? Why did God have to give my such a hefty and big body? Each day, I have to got embarrass myself with the constant struggle. If only I could have a normal figure but maybe this hefty body is going to help me out someday,” the bull thought to himself. 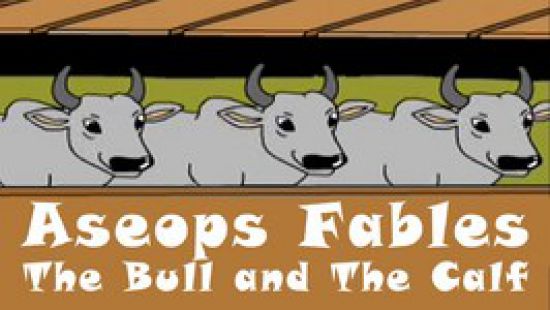 There was one calf who would always observe the struggle of the bull. He found surely hard to control the temptation of going up to the bull and telling him or rather instructing him on how to do it right. But, after all, he just kept shut. A few days passed by and the pull kept getting embarrassed each day. A few more days passed.

One day, as the bull was struggling to get free, the young calf came up to him and started a conversation. “Good morning, Mr. Bull. Hope you are doing well. But at present, I can see that you are struggling. Well, if you could just step aside for a moment, I can show you the right way,” said the calf.

The bull was amazed to hear what the calf had said. He was quite embarrassed enough to go through the door. But now, a kid was insisting on helping him. “Thanks for your concern but you should know kid that I knew the way even before you were born,” told the bull to the calf. The young calf understood his folly and said that he shouldn’t have said so. “I shouldn’t have advised the bull as he is much older than me,” said the calf. You may also like to read, The Bull And The Ass.

Here is a short visual depiction of the short fable story for kids “The Gnat And The Bull“. See the video story below,