The Cat And The Rat Story

This is The Cat And The Rat Story for kids. Once upon a time, there lived a cat. This cat was extremely watchful when it came to catching rats. It was so watchful that if a rat so much as showed it’s whiskers, it was sure to be eaten alive. Also, read Belling The Cat.

Therefore, all the rats became scared. They decided not to venture out of their tiny little dens. The rats felt as though the big bad cat was everywhere all at once. Soon, the cat realized that the rats weren’t coming out. “There is no point in waiting like this,” the cat thought one day. “I’ll have to deceive them,” it decided. 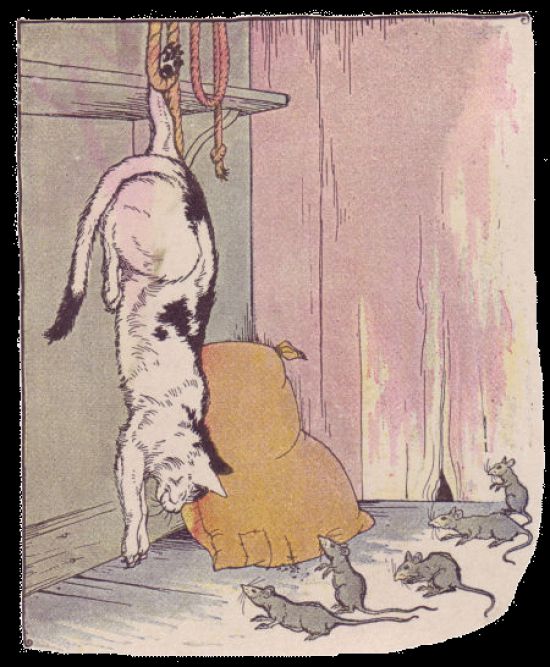 The Cat And The Rat Story

Image Source–> in.pinterest.com. Next, the cat decided to climb up a shelf. From there it hung down, dangling its head. It seemed as though he were dead! Now, when the rats peeked out of their dens, they found the cat dangling in an outrageous position. “Must be some kind of punishment,” they thought.

The rats decided to check whether the cat was truly dead or not. So they stuck out their heads and sniffed. But nothing happened. The cat hung there motionless. Then began the celebration of the evil cat’s death. “We won’t be hunted anymore!” They danced. And they sang. Out they ran in joy. Also, read Splat The Cat.

And just when the rats thought they were free, the cat let go of the rope it had been holding and pounced on them! The rats were stunned. Before the rats could get over the shock, the cat happily devoured three of them.

The remaining rats ran back to their homes sad and annoyed. Now, the rats were even more attentive. They kept themselves to their dens strictly. But the cat was still hungry for the rats. He had more than one trick up its sleeve. Next, the cat rolled up in a heap of flour. Once covered with flour, it hid inside the flour bin. And there, he lay in wait for the rats to come.

The rats were eyeing the heap of flour and were almost fooled again. But there was an old rat among the troop of rats. This old rat had a great experience with cats and traps.”Be careful now,” he warned the young rats. “That heap may be a meal for you all. But it could also be a cat!” Thereby saving the young rats fro an early death. You may also like to read, Cat And Mouse Partnership.

MORAL: THE WISE LET THEMSELVES BE TRICKED TWICE.