The Cat On The Dover-Mountain

This is the amazing short Christmas story for kids. This story is a re-telling of a Norwegian Christmas fairytale. Once upon a time, lived a man named Halvo. He had the chance of catching a great white bear. Also, read Stickman Story.

But as luck would have it, it was Christmas Eve and he had no place to stay. The man and his bear were on the Doverfell hill in Denmark. Soon, he found a cottage and asked, “Will I be able to find lodgings for me and my bear?” The woman said that they had a room, but at night Trolls happened to come by, which really was a nuisance. And the man added that the pack of elves was bound to come for a feast on Christmas Eve. 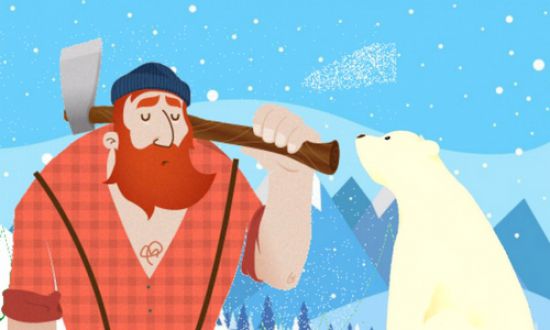 The man was desperate and took the room. He laid out a table for himself and the elves. The old couple left, as they always did before Christmas. Halvor took a place to sleep and his bear lay under the stove. At midnight, the army of Trolls strolled in.

They came in various shapes and sizes. Some big, some small, some with long noses, some bald. All of them helped themselves with the food. Enjoying and munching, no one took notice of the white bear. Except for one. The Troll found a fork and stuck a sausage to it, and went to the bear. Holding the sausage to the bear’s nose, he asked, “Kitty, do you want some.”

Once the bear awoke, there was no stopping it from hunting every last one of the Trolls. The ones that weren’t devoured ran for cover! And that was that.

When next Christmas Eve came, the Trolls came to call Halvor. “Halvor Halvor” one of them yelled. The man was chopping up some wood and answered the Troll. “Tell, me,” asked the Troll, “Do you still have the cat of yours?” “Yes, I do,” replied he. You may also like to read, Rudolph The Red Nosed Reindeer Story.

The Troll, scared out of its wits, ran yelling, “We will never see you again. Neither you nor your cat.” And they upheld their word!