One day when the deer was grazing near the river, he saw some bright red berries on the opposite bank. He said to himself, “Oh! Those berries look so delicious, I wish I could go across and eat them.” The deer kept thinking of the juicy berries and thought, “If only I could get across! But the wicked crocodile and his friends will eat me the moment I get into the water. Oh! What do I do?” Also, read The Deer Who Played Truant. 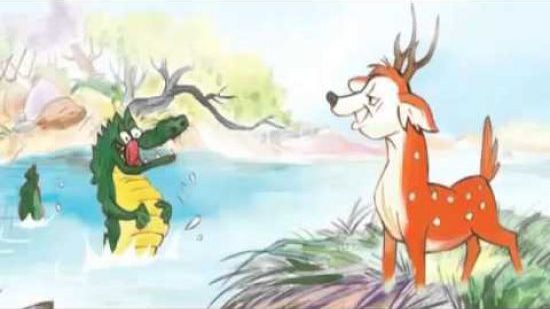 Image Source@ www.youtube.com. Suddenly, he was struck with a great idea. He went up to the edge of the river and shouted, “Mr. Crocodile, hey Mr. Crocodile!” On hearing the deer’s calls, the crocodile came up the surface and said in a gruff voice, “What is it deer? Why are you calling me?” The deer now stood at a safe distance and said, “The King is holding a banquet tonight and is inviting you and the other crocodiles. There will be a lot of delicious food there!”

The crocodile was pleased to hear that and said, “Wow! Is the king inviting us? This is unbelievable!” he said in wonder. Then he turned to the deer and asked, “Is the banquet tonight?” “Yes!” replied the deer. “The King has asked me to count the crocodiles and report the number to him. Call all the crocodiles in the river and ask them to line up one behind the other so that I can count them.” Also, read Rudolph The Red Nosed Reindeer Story.

The crocodiles called out to all his friends and told them about the banquet. He said to them, “Go on now line up so that the deer can count us.” The crocodiles obeyed. The deer then said, “I will climb onto your backs and jump from one to the other as I count. You won’t eat me. Will you? If you do, I won’t be able to report to the King and you won’t be invited to the banquet.”

“No, no, we won’t eat you. We promise,” said the crocodiles together. The deer then jumped from one crocodile to the other counting,”One, two, three….” as he went. He finally reached the other banquet and said, “Well, thank you Mr. Crocodile for your help! This will now be my new home!” He then ran off leaving the crocodiles angry and annoyed at being tricked.

And so, in this way, by using his wit, the deer was able to overcome the obstacles of the crocodiles. He lived happily in his new home, feasting on delicious berries and fruits every day. Also, read Olive The Other Reindeer.

Here is a visual depiction of one of the most amazing Animal Story for kids, “The Clever Deer”. See the video story below,