This is one of the amazing panchatantra english stories for little children. Once upon a time, on a hill lived a donkey. This donkey lived by himself.

One day, the donkey went out to eat something. That day, the donkey thought it would be a good idea to graze the grass on the hill. So, after climbing the hill, the donkey began to munch grass. As the donkey was grazing, a wolf happened to pass by. When the wolf saw the donkey, he immediately grew hungry. Also, read The Foolish Donkey. 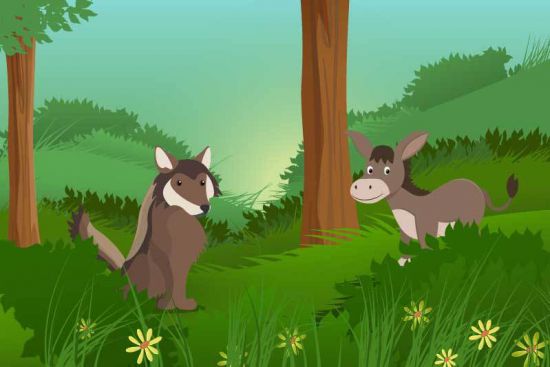 Image Source@ alltimeshortstories.com. “This donkey will be my lunch,” decided the wolf. Slowly, without being noticed the wolf crept nearer to the donkey. Now, the donkey was too engrossed in his grass. He did not see the wolf coming nearer.

Suddenly, the donkey noticed the wolf. But the clever donkey did not react. He kept munching. And while munched he began thinking about the ways he could save his life. Finally, he had an idea. All of a sudden the donkey began braying. He cried out loudly. “Ouch, my foot! Oh, my foot!”

When the wolf heard the donkey cry out in pain, he quickly ran to him. “What happened? Why are you crying?” “I was careless and walked on a thorn. Now that thorn is stuck in one of my hooves,” the donkey pretended to cry. “What?” asked the wolf in disbelief. You may also like to read, The Miller, His Son And The Donkey.

“Why should I care about that? I am going to eat you anyway,” the wolf said. “I know you will eat me. And that is the only reason why I am worried. Because when you eat me, the thorn will get stuck in your throat and you will choke.” The wolf thought about the donkey’s contention. And it made sense to him. So, he agreed to help the donkey.

“Alright,” the wolf said. “I’ll help you with the thorn and then I’ll eat you.” Then the wolf began to bend towards the donkey’s leg, to see where the thorn was. But before the wolf could see the thorn, the donkey’s kick hit the wolf’s face hard!

The wolf lay blinded by the kick, and the donkey took that opportunity to run away. “You fool!” the donkey yelled. When the wolf came to his senses, he realised he should have just eaten the donkey. Also, read The Horse And The Donkey.