This is one of the amazing stories from the tales of Arabian nights. Long, long time ago, in Turkey, a king named Sindibad ruled a kingdom. He was very fond of hunting. He was a famous hunter in the kingdom. There was no one to beat him in hunting in his country. The King had a loyal and intelligent pet Falcon. Wherever he went for hunting, he used to take Falcon with him. On one such hunting expedition, the falcon sat on the king’s shoulder when he rode into the thick forest. The servants also rode behind him watching the

One day, the king decided to go out for hunting. So, the falcon sat on the king’s shoulder when he rode into the thick forest. The servants also rode behind him watching the Falcon seriously. Suddenly, he stopped and watched very curiously. He heard a strange noise. There he saw a gazelle and said, “How beautiful it is!” He was very much attracted by its graceful walk and the long, slender antlers. Also, read The Thirsty Crow. 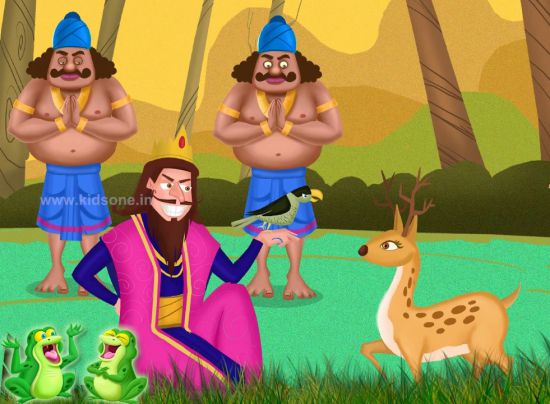 Image Source–> vimow.com. Suddenly he took his bow and arrow and aimed at the animal. But gazelle ran so quickly that soon disappeared into the bushes in the thick forest. The King and the servants chased it into the forest. But when the king continued his chasing, the servants could not follow him and stay back. The King was all alone with his horse and falcon. His servants could not see the King anymore.

Soon, it was evening. The King felt very tired and he was also thirsty. He cried “Water! Water please!” He moved here and there in search of water. He lost his way also. Finally, he came near a pond which had little water. He took his jar and filled it with water. As he was exhausted, he brought the jar near his mouth. Suddenly, the falcon flapped its wings. The wings which flung near the jar made the jar to slip and the jar fell to the ground. “What did you do? I am thirsty!” the King said.

The King patiently refilled his jar with water to drink. Again, when he tried to drink the water, the falcon fluttered its wings and spilled the water on the ground. Now the King got angry and said,” Are you mad! Don’t you know my thirsty? But the Falcon cared for his master and so she continued flapping its wings around the king. You may also like to read, The Bird With Two Necks.

So he thought that the Falcon was an ungrateful bird. So he drew out his sword from the cover to kill the falcon. But as the Falcon screamed and looked at the king, the King felt that the bird wanted to tell something. So the king looked up and there, he saw some poisonous snakes on the branches of the tree.

Finally, the king knew that the water in the pond was full of poison dropping from the mouth of snakes. If the King drank the water he would be dead. But the Falcon stopped his king from drinking the poisonous water. So the King realized that the faithful falcon had saved his life. So he smiled at the bird and murmured, “ You are my good friend. I am sorry to misunderstand you!” It also felt glad that his master understood its’ good intention.

Here is a visual depiction from the tales of Arabian nights “The Clever Falcon”. See the video story below,