This is one of the most amazing animal stories for preschoolers. Once upon a time in a jungle, there lived a clever jackal. One day, while wandering in the jungle, he saw a dead elephant. Eager to eat the flesh, the jackal went closer and tried to cut the flesh with his teeth. But, the skin was too tough to give way to the flesh. The jackal tried and tried. However, he could not succeed in cutting the thick skin.

The tired jackal sat near the dead elephant and started thinking how to solve this problem. Suddenly, the jackal eyed the lion who was coming towards him. The jackal said humbly, “Your majesty! I’m guarding this dead elephant for you. Please eat it!” The lion roared and said, “I never eat animals which are killed by other animals. I think you know this very well.” Saying this, the lion went away. The jackal was happy that the lion didn’t want to eat the dead elephant. But his problem to eat the elephant’s flesh was yet to be solved. 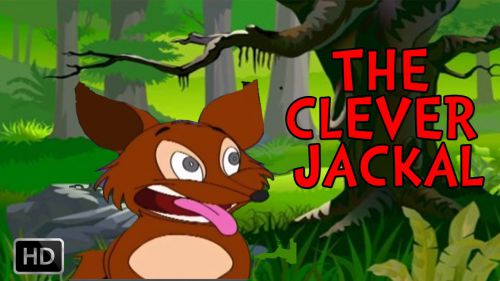 After some time, a roaring tiger arrived there. The jackal sensed the danger and thought, “The tiger would surely be interested in this dead elephant.” When the tiger came closer, he said in a hurried tone, “Please go away from here! I’m guarding the hunt of the king lion. He has gone to take a bath. Before leaving, he has told me that if any tiger comes here, I must inform him as he has vowed to kill all the tigers of this jungle.” Hearing this, the tiger got frightened and left the place.

Soon after the tiger left, a leopard approached there. The cunning jackal knew that the leopard had sharp teeth and it could be the solution to his problem. The jackal grinned to see the leopard and welcomed him, “Come, friend, come! I am seeing you after a long time. You look tired and hungry. Why don’t you take a few bites of this dead elephant! I’m guarding this elephant for the lion. He has gone to take a bath.” The leopard replied, “How can I eat the lion’s hunt? If he sees me eating his prey, he will surely kill me!” The jackal tried to convince him and said, “You just don’t worry about it. I will remain alert and signal you when I see the lion coming back!” The hungry leopard agreed and thanked the jackal for providing him this opportunity.

The jackal kept watching the leopard’s struggle with the elephant’s thick skin. As soon as he saw the leopard tearing off the skin from the elephant successfully, he shouted, “Beware! The lion is coming!” The next moment, leopard disappeared from there with lightning speed. The clever jackal laughed aloud and sat near the dead elephant to relish it all alone.

Here is a short visual depiction of one of the most amazing animal stories for preschoolers, “The Clever Jackal“. See the video story below,

Tagged with: animal stories for preschoolers