This is an amazing monkey story for kids to read. Once, long ago in the jungle, the animals were gathered around the watering hole. They were sad because a new lion had come to live in their part of the jungle. This lion was a terrible bully. He tied the elephant’s trunk in a knot and put fruits on rhino’s horn. The lion even played connect the dots with giraffe’s spots and made funny pictures.

The animals met to see how they could get rid of the lion. Above them on a tree, a monkey was listening. He started laughing. “Why are you laughing?” asked the animals. “I am laughing because you all are scared of the lion. I am not afraid of him. He has been working for me for years,” said the monkey. Also, read Monkey And Crocodile Story. 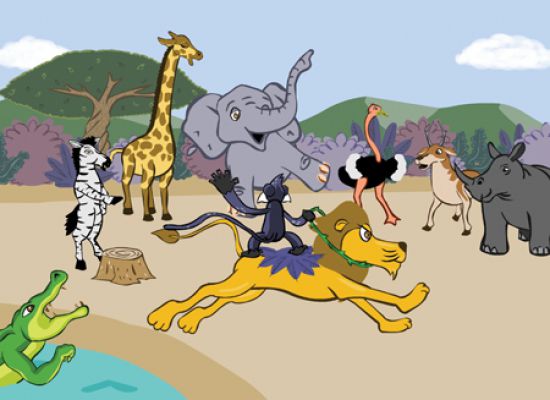 Image Source@ youtube.com. This thought of the monkey making the lion work for him made the animals laugh. The lion walked up to the animals and roared, “Why are you laughing?” The animals told the lion what the monkey had said. “Where is that monkey?” asked the lion. The animals pointed to the tree where the monkey had been sitting but he was gone. You may also like to read, Two Cats And A Monkey.

The lion stormed off to find the monkey. Far away from the watering hole, the monkey was sitting in the middle of the path. When the lion saw the monkey, he ran up to him and growled, “The animals told me that you said you were not afraid of me and that I worked for you!” “That is not what I told them, friend! I told them I am afraid of you and that I wish that I could work for you,” replied the monkey.

“Come on, lion! Let’s go see those silly animals and make sure they know the truth,” said the monkey. Together, they started down the path toward the watering hole. They had only gone a few steps down the path when the monkey grabbed his leg and cried.

“What is wrong with you?” growled the lion. “I stepped on a sharp rock. I am afraid that I can’t walk back with you,” said the monkey. “You have to tell all the animals that you really are afraid of me,” said the lion. “Well, I could make it if you would let me ride on your back,” said the monkey. The lion agreed and the monkey got on the lion’s back and started walking down the path.

They had only gone a few steps when the monkey cried out. “What is wrong?” asked the lion. “I’m having a hard time sitting on your back. It is very lumpy! It would help if I had a saddle,” said the monkey. The lion helped the monkey make a saddle out of palm leaves. The monkey sat on the saddle and said, “This is much better! Let’s go!”

They had only gone a few steps when the monkey cried out. “What is wrong?” growled the lion. “I’m afraid of falling out of the saddle. It would help if I had something to hold,” cried the monkey. The lion helped the monkey tie some wines around his neck. “This is much better! Let’s go,” said the monkey. Also, read The Noble Monkey.

Here is a short visual depiction of this monkey story, “The Clever Monkey“. See the video story below,