This is a funny story for kids to read online. Once upon a time, there lived a cunning fox in a very big forest. The fox was very proud of his intelligence. One day, he was very hungry and wandering in search of food all around the forest. He was so hungry that he could not even walk. Also, read The Donkey In Lion’s Skin.

Suddenly, he saw a rooster up on the roof of the house. After seeing the rooster, the fox started drooling and started building castles in the air. He thought of eating the rooster. The fox made a plan to bring the rooster onto the ground and then he would eat him up. 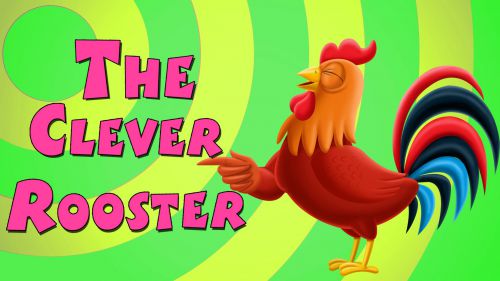 The fox pretended to be the rooster’s friend “Oh my dear friend rooster! I am seeing you after a very long time. You seem to have lost some weight and have become very weak. Come down and let me count your pulse and see what is wrong,” said the cunning fox. Also, read The Clever Tortoise.

“You are my dear fox! I am feeling very exhausted and weak. I can’t even come down from the rooftop,” replied the clever rooster. The fox realized that the rooster was too clever for him. The rooster started laughing out loudly. The fox was completely embarrassed and went away running as fast as he could. Also, read The Frog Whose Belly Burst.

Don’t forget to check out the printable version of this story on Pinterest here.

Here is a short visual depiction of a funny story, “The Clever Rooster“. See the video story below,