This is one of the best Jataka Stories In English for kids. One morning in a faraway village, Ravi helped his old father onto a bullock cart. Just at that very moment, his son, Vivek ran towards them. “Father, where are you taking grandfather?” he asked. His father replied, “I am taking him to the town.” Vivek wanted to accompany him but Ravi, however, told the boy to stay at home. Also, read The Greedy Crow Story.

He called his wife to take Vivek away. But, Vivek ran after the cart and jumped in. Ravi gave up and took him along. They rode on and soon, they came to the graveyard. Ravi got off the cart and said to his son, “Stay with your grandfather. I will be back soon.” He then went to an isolated spot and began digging. 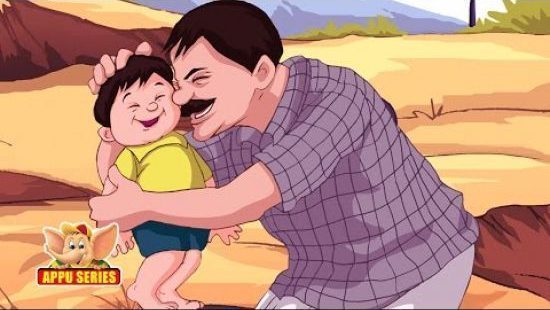 “Son, it’s a grave for your grandfather!” Ravi told his son. But his clever son said, “But the grandfather is not dead.” The father then said, “Yes, but he is old and useless now. He won’t live long. So, there is no harm in burying him now.” The son understood the reason and son he also picked up the spade and began digging not far away.

“What are you doing, son?” he asked. “When you are an old father, I will bring you here and push you in!” The father shouted in anger and said, “How could you do that to your own father?” The clever son thought that it was a family tradition and he would not like to break his family traditions.

After hearing this, Ravi realized his folly. He hugged Vivek and said, “Son, you have stopped me from committing a horrible crime.” Ravi then took his father home and took good care of him for as long as he lived. He then told his wife of all that had happened and said, “You know, sometimes, children are wiser than us!” THe family lived happily ever after and cared for each other always. Also, read The Teacher And The Disciple.

Here is a visual depiction of one of the best Jataka Stories In English for kids, “The Clever Son”. See the video story below,