This is one of the best short stories with moral values for children. One day, in a village a thief was passing by. “I should think of something quick,” the thief thinks, as he had used up all of his stolen money already.

So, as he is walking and wondering what to do, he spots an old man by an orchard. He watches the old count a thick wad of money from a distance. “That is a lot of money,” the thief thinks. Although the thief did not know how to steal the money from that old man in broad daylight. Also, read The Kind Thief. 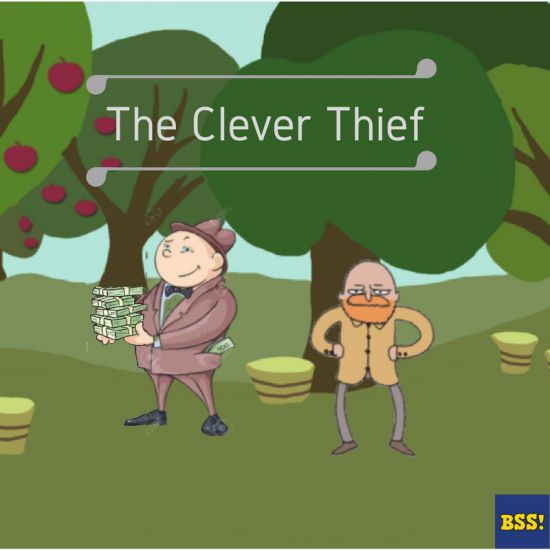 “What plan should I device to steal that money,” the thief kept wondering. Then, suddenly he has a brilliant idea. “I will fool him and take all of his money,” the man decides as he walks towards the old man. “Hey!” the thief yells at the old man, “What do you think you’re doing?” The old man is shocked, he does not understand why he is being yelled at by a stranger.

“Why are you stealing fruit from the orchard, old man?” the thief asks in a loud voice. “You must be mistaken, young man,” the old man politely replies. “I do not like fruits, so why would I steal fruits from your orchard?” “No, no, I am not mistaken,” the thief tells him. Then after pausing for a bit, he says, “last year you spoke ill of your neighbor. You complained about your neighbor for hours!” You may also like to read, The Old Man And His Sons.

Then the old man says, “That cannot be true, for I did not live in this house. I only moved here recently.” The thief put up an annoyed look and then yelled again, “then it must have been your older brother!” “What?” the old man asks, “Older brother? But I do not have an older brother!”

By now the thief had become extremely annoyed so he says to the old man, “nevermind. It doesn’t matter if it was you or your brother! But I definitely know it was an old man like you!” Then, the thief snatched all the money away from the old man and ran away. Also, read The Thief And His Mother.