The Crow And The Monkey

This is one of the best Panchatantra stories with pictures. Once upon a time, there was a huge banyan tree in the forest. On this tree, the crow lived with her family happily. The crow had made a beautiful home for herself and his family.

A monkey also lived on the same banyan tree. The monkey neither had a family nor he had a home for himself. Sometimes, he would sleep on the branch of the banyan tree and sometimes he would shift from tree to tree. Also, read The Greedy Crow. 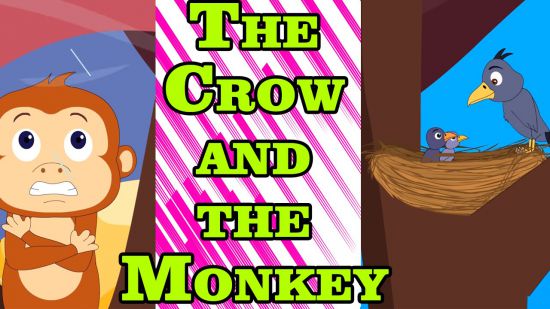 One day, it was raining very heavily. The strong winds were blowing and there was lots of thunding and lighting. The crow protected herself andher family from the storm by taking shelter in her nest. On the other hand, the monkey had no place to go. He sat shivering in the rain and cold.

The crow felt bad for the monkey. She asked the monkey to build a house for himself, so that he could protect himself from such rain and thunder. The monkey was cold and wet. He was already in a very bad mood. The monkey was very annoyed with the crow for advising him while she sat comfortably in her nest.

He torn a branch of the tree and began to beat at the crow’s nest. Very soon, the nest broke into pieces and fell to the ground. The poor crow’s babies fell to the ground as well and got soaked in the rain. The crow had somehow managed to fly away and she took shelter on another tree.

She wept bitterly over her broken her young ones and the nest. The crow had no time even to repent for their good-intentioned advise given to the monkey. You may also like to read, The Dancing Monkeys.

MORAL OF THE STORY: IT IS BETTER NOT TO ADVISE PEOPLE IN THEIR PERSONAL MATTERS.

Here is a short visual depiction of one of the panchatantra stories with pictures “The Crow And The Monkey”. See the video story below,