The Crow and the Peacock Story

Zzaru, the pig introduces all the candidates in the competition. The first candidate is the Swan. She pledges to become an honest and truthful Queen. The second contestant is an Eagle. He pledges to strengthen the Kingdom. The last one was the Peacock. She pledges to make the most beautiful kingdom. 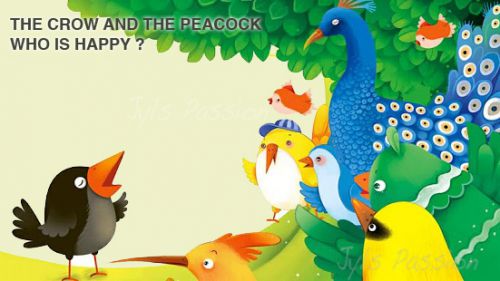 The king of the birds competition was reaching it’s peak. Most birds joined in for fun except the Crow. He was unhappy. He also wanted to become the King. But the Crow could not think of anything that he was proud of. Crow saw different types of feathers. Swan’s white feather, Eagle’s large feather, and Peacock’s beautiful feather were all dropped in the ground.

The crow came across an idea. He started to attach those feathers on his body and entered in “The king of the birds competition.” Zzaru, the pig announced the forth contestant, the crow. He said,”I posses all the advantages of the Swan, the Eagle and the Peacock. I have the Swan’s white face, the Eagle’s grand and huge wings and the Peacock’s beautiful gorgeous feathers.”

Suddenly the Peacock noticed that the Crow has attached his feathers, Eagle’s feathers and Swan’s feathers. All of them ran up to the Crow and pulled out the fake feathers. All naked, the true identity of the crow was revealed. Shocked audience shouted at the crow for his deception.

Moral Of The Story: We should never copy others. We should always be ourself.