This is one of the best animal moral stories for kids. Once upon a time, a Lion used to live with his family in the jungle. The Lion was ruling that jungle for a very long time. The Lion grew old with time. In his last days, the Lion said to his Cub, “My son, you have been living under my guidance. I have always kept you away from all troubles.”

The Lion continued, “However, once I’m gone, you will have to look after for yourself. You will find a different kind of animals. Always remember that you are strongest amongst them. Never be afraid of anyone- except a Human!” “Human?” asked the Cub. “Humans are extremely dangerous,” the Lion told his Cub.The Cub carefully listened to his father and promised to remember this life lesson. Also, read The Lion And The Camel. 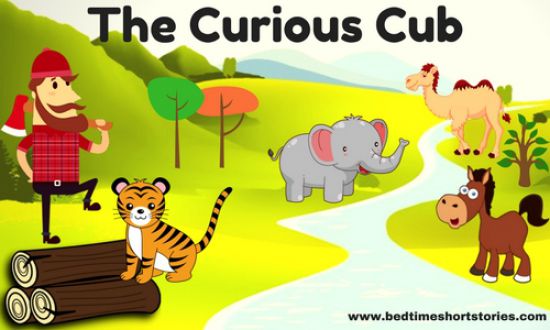 After a few days, the Lion died. The Cub developed a unique mentality for Humans. The Cub stayed in illusion and wished to meet a human being once in its life. Due to its curiosity, the Cub went on to find a human being in the jungle.

While wandering in the jungle, the Cub found a tall animal. It was a Horse. The Cub presumed the Horse as a Human Being. The Cub went to the Horse and asked him, “Are you a human being?” On this question of the Cub, the Horse replied, “No brother, I’m a horse. Humans are very intelligent. They ride on me!”

The Cub was left appalled on listening to the reply of the Horse. It asked the Horse in a surprising manner, “What? Human Beings ride on you?” “Yes, indeed!” the Horse replied. The Cub moved on after listening to the Horse. The Cub thought, “Human beings must be strong creatures!” You may also like to read, Story Of Woodcutter And His Good Deed.

After traveling for some time, the Cub found a Camel. On seeing the height of the Camel, the Cub presumed the Camel to be a human being. The Cub went to the Camel and asked, “Listen, are you a human?” The Camel got scared first on seeing the Cub but replied after listening to its question, “No, I’m a Camel!”

“Have you ever seen a human being?” the Cub asked. To this, the Camel replied, “Yes! They are extremely intelligent. They use me for work purpose and put weight on me for traveling from one place to another.” The Cub thought, “This Camel was so tall. Yet a human uses it for his own good. He must be big and strong.”

After traveling for a while, the Cub found a humongous animal with two long teeth. It was an Elephant. On seeing the Elephant, the Cub felt confident that it was a human being. The Cub went to the Elephant and said, “Are you a human being?”

On this statement of the Cub, the Elephant laughed a lot. Then it replied to the Cub, “I’m an Elephant! Human beings are very clever. They compel me to dance in the circus by threatening to beat me with a rod.” “What did you say? Humans force you to dance by threatening to beat you with a rod?” asked the Cub. On hearing the Elephant, the Cub felt assured that human beings were dangerous. You may also like to read, The Lion And The Elephant.

The Cub reached the edge of the jungle. There, the Cub noticed a man. The man was cutting woods through hammer and sickle. The Cub didn’t understand who was it. It went to the man and asked, “Have you ever seen a human being?” “Why do I need to see? I’m myself a human,” replied the man.

The Cub was shocked to see the man as it never thought a human being would be so different than its image. The Cub laughingly replied to the man, “You are human? I thought human beings are small and dangerous. I can hunt you at this very moment.” On seeing the Cub approaching towards him, the man used his intellect, “Stop! If you think you are stronger than me then try to remove this sickle from wood,” said the man.

The Cub put one of his hands in the gap and removed the sickle from the other. As soon as the Cub removed the sickle, the gap got closed and its hand got stuck. The Cub screamed out loud, “Oh, lord! It’s so painful! Save me!” The Cub realized its mistake and it said to the man, “Please, forgive me! I have understood that human beings are very intelligent. I promise that I will never confront a human being ever again!” On listening to this, the man removed the Cub’s hand and the Cub ran away into the jungle. Also, read The Horse And The Donkey.

MORAL OF ANIMAL MORAL STORIES FOR KIDS: WE MUST ALWAYS FOLLOW THE ADVICE OF OUR PARENTS.