This is an amazing fairy tail short story for kids. Tookius’s father was very ill. One day, he called his son to his bedside and said, “My son, I am growing weaker every day. Therefore, I think it is about time that I give you this and saying so, the old man gave him a horn. Tookius asked his father, “Father, this is just an ordinary horn! What will I do with this?” His father explained, “My son, this is not an ordinary horn. If you place this to your ear, you will be able to hear the other person’s thoughts! It will help you greatly!”

A few days later, Tookius’s father died. Tookius thought to himself, “There is nothing more for me here. I think I shall travel for a while and look for some work on the way.” And saying so, he set off carrying his father’s horn. Also, read The Princess Who Never Smiled. 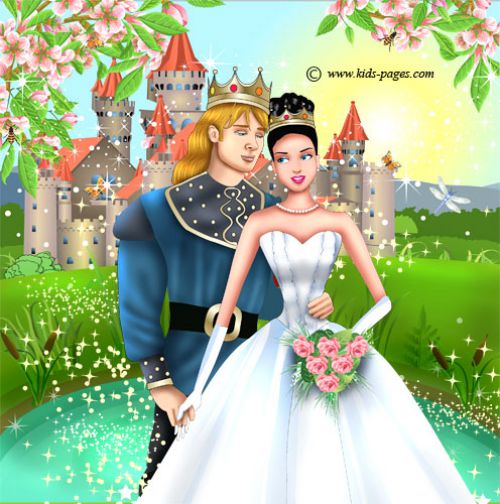 Image Source@ www.kids-pages.com. After travelling for many days, he finally arrived at a castle. There he met the owner of the castle, a giant with long hair. He pleaded the giant to give him some work. The Giant said, “If you can cook well, you can cook my meals!” He impressed the Giant by making him a very tasty dinner and so he was hired.

One day, as Tookius was walking around the castle, he found his way down into the cellar. As he came closer, he heard someone crying. He searched the cellar and found a beautiful girl tied to a pillar. “Who are you? Why are you tied up like this?” Tookius asked the girl.

She replied, “My name is Chakkali and I’m the Princess of this beautiful Kingdom. The Giant killed my father, the King, and then took me captive. Please help me!” He felt sorry for the Princess, but he admitted, “What can I do? I am just an ordinary guy and he is a giant. How can I even overpower him?” Tookius was very sad as he could find no way to help the Princess. You may also like to read, Princess Rose And The Golden Bird.

One day, he decided, “I have nothing to lose! Let me use Father’s horn and see if I can listen to the Giant’s thoughts!” No sooner did he raise the horn to his ears, he could hear the Giant think, “I think the cook has found out about the Princess! Tomorrow, I will eat him up for breakfast. Till then I must make sure he doesn’t know the secret to my strength is my hair.”

Tookius was delighted to learn that the Giant would not be of much trouble without his long hair. Therefore, that night he crept into the Giant’s bedroom and cut off his hair while he was sleeping.

The next morning, when the Giant awoke, he felt very weak and soon realized that his power was gone. Knowing that Tookius would now be able to beat him up easily, the weak Giant gathered his belongings and fled from the castle.

As soon as Tookius realized that the Giant had fled, he ran down to the cellar and freed the Princess. Finally, the curse of the Giant was lifted and the castle turned into a magnificent palace. Tookius married the Princess and became the King. Also, read The Laughing Princess.