This is one of the awesome Jataka tales short stories in English. A long time ago, on the foothills of the Himalayas, there lived a large flock of birds. The King of the birds said, “Go and look for grain. If you find some, report to me and we will share it!”

Soon, all the birds set out. One bird flew far away and found many carts loaded with grain passing through a road. As the carts passed, grain fell onto the road. “Wow! So much grain! What a feast! I won’t tell the others or I’ll have to share with them,” thought the selfish bird and then flew back to his flock. Also, read The Story Of A Blue Bird. 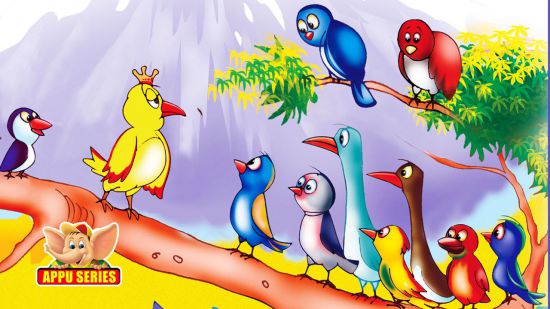 Image Source@ www.youtube.com. When the other birds asked him if he had found anything he said, “Oh, my dear friends! I found a road with many carts.” “Carts? There must be a lot of grain there!” said the birds excitedly. “Yes, but there were so many carts rushing by that it will be no use to even try for it,” said the selfish bird.

The other birds were disappointed and said, “Oh, what a waste! Our lives are more important. We won’t go there.” The bird was thrilled to see his plan work. Everyday after that, he would fly off to the road and eat his fill.

Soon, he got very fat and the other birds got suspicicious about him. One day, as the bird set out as usual, the King followed him at a distance. The King saw the bird feasting on the grain and realized that he had cheated the others. As he watched, a cart came down the road. The greedy bird saw the cart and said, “It’s still far away. I have time to eat some more,” and went on eating.

The cart was moving at a great speed and suddenly the bird cried, “Oh, no! It’s here!” And before he could fly away, the cart ran over him. The bird laid their on the birch of death where the King flew to him. He was very ashamed and said, “I am very sorry, your Majesty!” Saying this, he died.

The King flew back to his flock and told of all that had happened. “I hope you realize that selfishness brings ones own ruin,” he said. You may also like to read, The Wise Old Bird.

Here is a short visual depiction of one of the Jataka tales short stories in English “The Deceiteful Bird”. See the video story below,