Once upon a time, there lived a pet dog named Cody. He was not happy with his life. As he was relaxing in the garden, he saw a cat on the top of the wall. Cody thought, “I wish I could climb those high walls like that cat!” This feeling annoyed Cody very much. When his master came to give him milk, he did not even wag his tail. 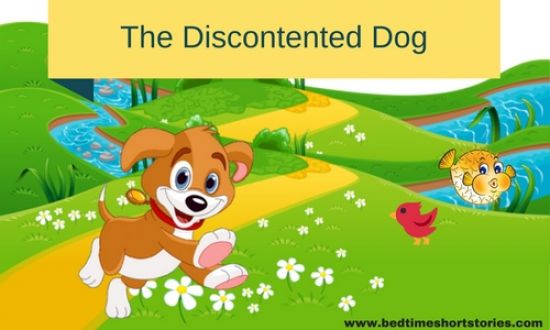 After some time, Cody spotted a sparrow sitting on a branch. “I wish I could fly like you. I envy you,” said Cody. “I wish I could play all day long like you! I wish I did not have to build the nest for myself, tire my wings, and search for food,” cried the sparrow.

As Cody was walking, he met a donkey carrying the load. The donkey said, “You are so lucky! You don’t have to carry heavy load like me!” “Yes, even I have to wake up the owner early in the morning,” said the unhappy rooster. Just then, a sad sheep approached them and said, “You people don’t know what I go through!” Listening to them, the dog realized its folly for not appreciating what it had. Also, read The Dog In The Manger Short Story.

When the dog heard his friends’ problems, he thought, “I guess no one is happy with what he has! So, from now on, I will enjoy being myself!” Since that day, Cody started enjoying his life without worrying about anything.

MORAL OF THE STORY: APPRECIATE WHAT YOU HAVE AND BE YOURSELF!

Here is a short visual depiction of one of the best inspirational moral stories for school children “The Discontented Dog”. See the video story below,