The Dog And The Oyster

This is one of the awesome fables of aesop for children. Once upon a time, there lived a dog. Now, this dog had an appetite for eggs. Raw or cooked, the dog would gobble it all in no time. He simply loved to eat eggs.Also, read The Greedy Dog. 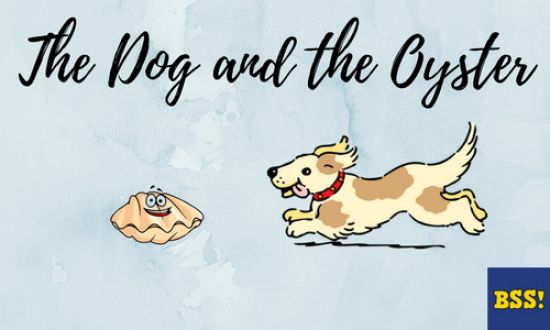 One day, after all the egg eating the dog decided to roam around. As he was roaming around, he found his way by a seashore. He spied and sniffed along the coastline. As he sniffed around he found a fascinating object. It looked round and beautiful. The round object even shone. Upon closer inspection the dog realized, he had never seen anything like that before. Since it was round, the dog instantly thought it was an egg. And that he could eat.

Without wasting a moment the dog swallowed it, thinking it was an egg. But what did the dog know that it wasn’t an egg but an oyster! He hadn’t even looked at it properly. Obviously, the poor dog became ill. His stomach ached and the poor dog could hardly move. And that’s when the dog realized that he had eaten something wrong.

After a lot of pondering, the dog came to the conclusion that the round object surely wasn’t an egg. Because if it had been an egg, his stomach wouldn’t ache. So, from that day onwards the dog never jumped to things without thinking. And he realized that not all round objects are eggs! You may also like to read, The Dog Who Went Abroad.

MORAL OF THE STORY: ACT IN HASTE AND REPENT AT LEISURE; OFTEN IN PAIN.