The Dog, The Cockerel And The Fox

This is one of the amazing Aesop’s tales for children. Once upon a time, in a farm lived a dog and a cockerel. They were the best ofriends. Also, read The Dog In Manger.

One day, the two decide to venture out of their farm. They had been living the farm since their childhoods, and now they wanted to see how the world on the outside looked like. So, the two friends set out together. They took a path that led to the woods. Both of them were in high spirits and were happy to be out. 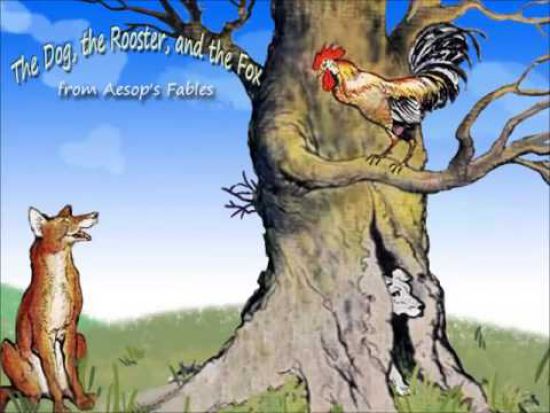 Image Source@ www.youtube.com. As the night approached, they started to look for a place to spend the night. Now, the cockerel found a tree. This tree had a hollow bark. So, it was decided that the dog would sleep in the hollow and the cockerel would climb up on the branches to sleep. After getting comfortable, the two fell asleep.

When dawn broke, the cockerel woke up. The poor cockerel had forgotten where it was and began roosting. It roosted out of its regular habit forgetting that now it was in a forest. But instead of waking the farmer and the other animals, the cockerel woke up a hungry fox. Now, this fox was not that far away from the tree.

The moment the fox heard the cockerel, he instantly knew that he would have the cockerel for his breakfast. So, he ran to the cockerel as fast as he could. “Oh good morning, honoured sir. I am here to welcome you to our woods. I am sure we shall become great friends,” the fox said when he found the cockerel.

Now, the cockerel had known foxes and their shrewd nature. So, the cockerel said, “I am flattered, kind sir. Well, if you could go around my house to the door, my porter would let you come up.” Now the hungry fox, ran at once to the door. But nothing in the world could have prepared the fox for what he found.Also, read The Hen And The Fox.

The moment the fox found the hollowed entrance, the dog jumped onto the fox and tore him into pieces.

MORAL OF AESOP’S TALES: THOSE WHO TRY TO DECEIVE OTHERS, WILL BE PAID IN THEIR OWN COIN.