The Donkey And The Leopard

This is one of the amazing small moral stories for kids. Once upon a time, there was a washerman who had a donkey. The donkey was very lazy and was hungry all the time. But the washerman was poor. So, it was impossible for him to feed the donkey whenever he was hungry. Over time, the donkey became very lean and thin.

One day, the washerman went to the town with his donkey. While on his way back, he was passing through a jungle when he spotted a leopard’s skin. Immediately, he thought of a plan to feed his donkey. Also, read The Miller, His Son, And The Donkey. 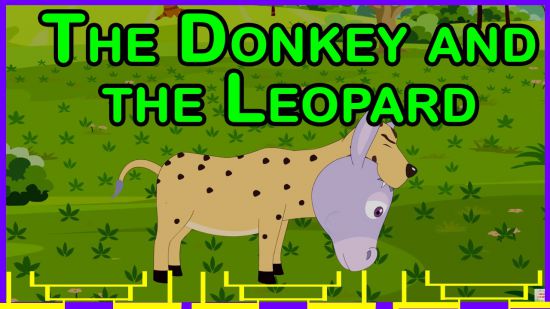 That night, he covered his donkey with the leopard’s skin and drove him to the field. The other farmers were frightened to see a leopard and they ran away. The donkey ate his fill and came home. This went on for months. The donkey ate happily for many days.

One night while the donkey was eating in the field, he heard the braying of another donkey. Out of excitement, he started to bray back at him. The farmers soon realized that the animal they were afraid of was none other than the lazy donkey.

The farmers were very angry. They came out of their house with the sticks and beat up the donkey. They hit the donkey until the donkey cried out loud in pain. The washerman was ashamed of what he had done and realized his mistake. The next day, he went to all the farmers and was guity for his wrongdoings. You may also like to read, The Donkey In The Lion’s Skin.

MORAL OF THE STORY: YOU CANNOT KEEP FOOLING PEOPLE ALL THE TIME. SOME DAY OR THE OTHER, NO MATTER HOW THEY WILL FIND THAT YOU ARE TRICKING THEM.

Here is a short visual depiction of one of the small moral stories for kids “The Donkey And The Leopard“. See the video story below,