The Donkey In Lion’s Skin

This is one of the best short funny kids story to read online. Long, long ago there was a donkey who stayed near the village. Everybody used to think that he was weak and useless. Once he was roaming all around the forest. Suddenly, he found a lion’s hide. Just then he had an amazing idea, he thought to fool the other animals and people by wearing the lion’s hide. So, he took the lion’s skin and covered himself with it. Also, read The Horse And The Snail.

He started to walk around in the forest wearing the lion’s hide so that he could look like an actual lion. First, all the animals who saw him got scared and started running away from him. This assured him that his plan was working. Then he paid a visit to the village where he lived, everyone who saw him there also thought he was a lion and ran away. 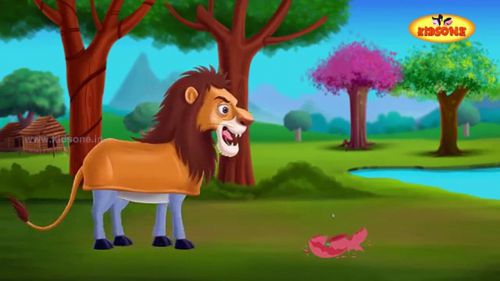 Everybody got scared. All the animals and villagers were so afraid of him. The donkey was enjoying all this and he roamed around freely without any fear. He was very happy because now he didn’t need to be scared of anybody.

However, one day, as the wind blew strongly, the lion’s hide that he was wearing flew off. The donkey’s biggest secret was out. “This is a donkey! And we thought it was a lion,” said the angry villagers. They chased the donkey out of their village but he surely had the last laugh. Also, read The Strange Egg.

Here is a short visual depiction of this funny story in English, “The Donkey In Lions Skin“. See the video story below,