This is a great Panchatantra story for children. Long time ago, there lived a priest who was extremely lazy. Because of his laziness, he could barely earn anything. He was poor, too. Now, this priest didn’t want to work hard. He was always dreaming of being rich one day. He used to earn his butter and bread by begging for alms.

One fine day, he got a pot of milk as part of the alms. He was extremely happy and went to home with the pot of milk. He soon boiled the milk, drank half of it and kept the remaining milk in a pot. He then added slight curds in the pot for converting the milk into curd. Later, he laid down to sleep. Also, read The Poor Man’s Dream. 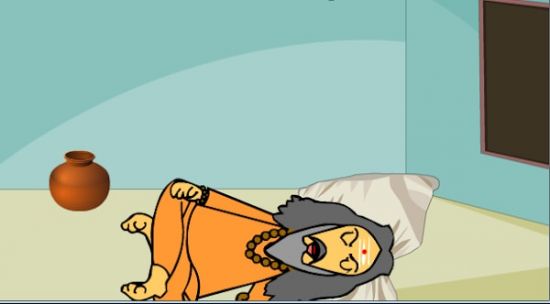 Soon, he was in deep slumber and started dreaming about the pot of curd while he lay asleep. He dreamed that if he could become rich somehow all his miseries would be gone. His imagination turned to the pot of milk he had set to form curd.

He dreamed on and on and thought, “By tomorrow morning, the pot of milk will turn into to curd. I will then churn the curd and make butter from it. I will heat the butter and make ghee out of it. I will then go to the marketplace and sell that ghee and make good money from it. With that money, I’ll buy a hen. The hen will lay eggs which will hatch and there will be many chicken. These chicken will in turn lay hundreds of eggs and I’ll soon have a poultry farm of my own.” He kept on daydreaming.

His dream continued, “I will sell all the hens of my poultry and buy some cows, and open a milk dairy. All the town people will buy milk from me. I will be very rich and soon I shall buy jewels. The king will buy all the jewels from me. I will be so rich that I will be able to marry an exceptionally beautiful girl from a rich family. Soon I will have a handsome son. If he does any mischief I will be very angry and to teach him a lesson, I will hit him with a big stick.” You may also like to read, Dream, Dream, And Dream.

As he was dreaming, he involuntarily picked up the stick which was kept next to his bed and thinking that he was beating his son, he raised the stick and hit the pot. The pot of milk broke and he awoke from his daydream.

MORAL OF THE PANCHATANTRA STORY: THE DREAMS CANNOT BE FULFILLED WITHOUT HARD WORK.