The Eagle And The Arrow

Here is a famous aseop online story to read for kids. Once upon a time, there lived an eagle in the forest. He was a strange creature. He got his fun out of teasing and frightening the little birds. The poor little birds would cower with fear and try to fly away. Eagle would then burst into an ear-piercing laugh and flap his wings scornfully. “I am the king of the sky. How scared you all are of me!” he would exclaim.

All the birds did not like the Eagle and they all thought he was very mean, for the other eagles swooped down on the smaller birds only when they were hungry. 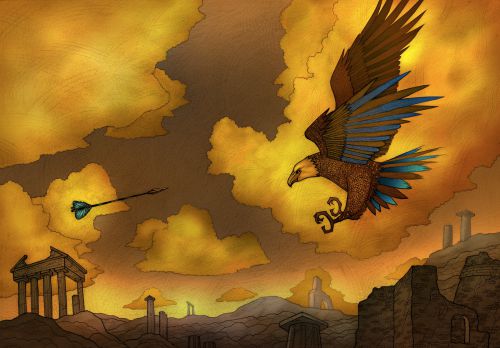 Once, it so happened that a group parrot was flying in the sky and the Eagle decided to scare them. He came swooping down on them from out of the blue. The parrots shrieked and scattered in different directions. But, just then, the Eagle’s sharp ears caught a whizzing sound. He turned around and saw an arrow was coming towards him. That arrow was not meant for him, but the parrots.

The eagle turned away but the parrots had flown out of the way. Swick! And the arrow struck the Eagle right in the heart and he started fluttering to the ground. “Oh, no! I don’t want to die! I have so many years more to live!” said the eagle. But, he was losing his blood very fast.

He felt to the ground with a thud and with dying eyes looked at the killer arrow. It was decorated with one of his own feathers. “Oh god! No!” said the Eagle, as he died.

MORAL: WE OFTEN GIVE OUR ENEMIES THE MEANS FOR OUR OWN DESTRUCTION.

Here is a visual depiction of this famous aseop online story for kids, “The Eagle And The Arrow”. See the video story below,