This is one of the amazing motivational stories for students. Once upon a time, by the mountainside, lived an eagle. The eagle had laid four large eggs in its nest. Then one day, there was a massive earthquake. As the earth shook, one of the four eggs rolled down the valley into a chicken farm.

When the chickens found the extremely large egg, they decided to protect it. They treated it just as they treated their own eggs. Eventually, the eagle’s egg hatched along with the others. Now, the chickens were chickens and knew nothing of eagles and their babies. So, the eaglet was treated like a chicken and was raised like one of them. Also, read The Eagle And The Arrow. 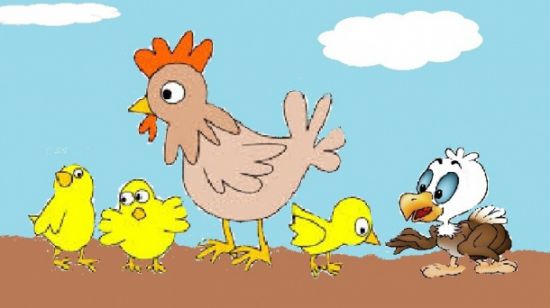 One day, the eaglet was looking up at the sky. And an eagle soaring in the sky caught his attention. So, the eaglet tells all his chicken comrades that he too wanted to soar like the eagle. The other chickens only laughed at him. “You?” they teased him, “You are no eagle! You are a chicken, like the rest of us. And chickens don’t fly!”

The baby eagle was happy with his chicken family, but he seemed to be missing something. Every day, the baby eagle would look at the sky and long to fly. And every time he voiced out his dreams about flying, he would be told the same thing, “You cannot fly, you’re a chicken and that is all you’ll ever be!”

As the chickens began growing up, they imitated their mother. The little chicks began walking and eating like her. And the poor eagle had no choice but to do the same. As time went by, the chicks grew up to be chickens. And the eaglet too became an eagle. You may also like to read, Chicken Little Story.

MORAL OF THE STORY: YOU BECOME WHAT YOU BELIEVE. DARE TO DREAM AND DARE TO FOLLOW IT.