This is one of the best 1001 nights stories for kids. Once upon a time, Persia was ruled by a great king called Sabut. Now, it was well known that Sabut had immense love for science.

Once, when the Persian kingdom was hosting a festival, three wise men came to see the King. Each of them bore a one of kind gift. First was a beautiful horn that could beat any man who threatened to attack the land. The second was a basin, with jewels and a beautiful peacock that also showed time in a unique manner. Third, and the prettiest of all was the horse made out of ebony that could fly anywhere. Also, read The Enchanted Horse. 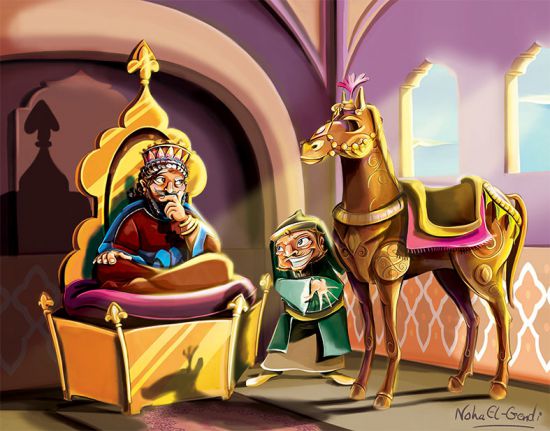 Image Source@ dropr.com. Now, the king wanted to marry his daughters to the wise men. One of the king’s daughters overheard this and decided to tell her brother, Kamar al-Akmar. Now, Kamar was curious about these precious inventions. So he confronted his father. His father showed him the presents. Kamar wanted to test the ebony horse. So, as per the direction of the inventor, Kamar sat on the horse. As soon as Kamar sits on the horse, the horse takes off! And the inventor was imprisoned under suspicion of helping Kamar take the horse.

Once up in the sky, Kamar had no idea how to make the horse go back to the ground. In a place far from the palace, Kamar finally manages to descend to the ground. Kamar finds himself in a castle. Soon after he finds only one guard. He took the guard’s sword and his bag.  “Oh, food!” said delightedly when he found some food in the guard’s bag. Then, Kamar wanders around in the castle, in search of people. Soon, he comes across a room with rich cushions and bed. Around the bed, many servant girls were standing. When Kamar went to the bed he found a beautiful princess. And it was love at first sight!

When the princess wakes up, she thinks Kamar is the ugly prince she was to marry. But the lady in waiting tells her that he is not and then goes to fetch the king. The king rushes to meet the prince. But the prince did not give a proper introduction but instead claimed to be the Princess’ husband. You may also like to read, The Clever Falcon.

The king was not pleased, and Kamar challenges them, saying “You have two options. First, I go back and bring my army to destroy your kingdom, or you fight me.” The king chose the latter. Next day, the king brings his entire army. Whereas, Kamar only stands with his ebony horse. Kamar waited for the right moment, and then he fled the battlefield with his horse. He then goes to find the princess and persuades her to run away with him. The princess agrees and they fly back to Kamar’s kingdom.

Once in the palace, Kamar asks the princess to wait in the royal garden while he prepares a grand welcome for her. While, the princess, Shams al-Nahar, is waiting for Kamar to return, the inventor of the ebony horse finds her. “The princess has sent me to bring you to the palace.” The princess willingly goes with him. A while later, the princess realizes that the inventor had abducted her. Try as she might, but she could not escape.

Kamar, on the other hand, finds out that the inventor of the ebony horse has abducted her, so he goes in search of them. While the inventor and the princess sneak into the Greek lands, they were stopped. Then inventor poses to be the princess’ husband. The guards saw through his lies and threw the inventor in prison and on the king’s orders, the princess was taken to the palace.

So, Kamar decides to forgive the inventor and goes straight to the palace. There Kamar pretends to be a doctor, a practitioner of medical arts. He demands the ebony horse. “It is necessary for the treatment of the princess.” The king orders to bring the princess. Kamar whispers in the Princess’ ear to pretend to be mad. So, when the horse is brought Kamar asks the princess to climb the horse. Then he too, climbs the horse, telling the king that it was a medical trick. Also, read The Fisherman And The Genie.