The Elephant And The Rope

This is one of the amazing inspirational stories for students. One day, a man was passing by a circus that had come to his town. Many people flocked the circus ground. It had only arrived and was setting up the stage. All the circus animals were kept separate.

As the man was passing by, he noticed something extremely peculiar. The majestic and gigantic elephants were tied to a pole by a thin rope. above all, what baffled him the most was, the elephants did not try to break free even once! Also, read Two Boys And The Tree. 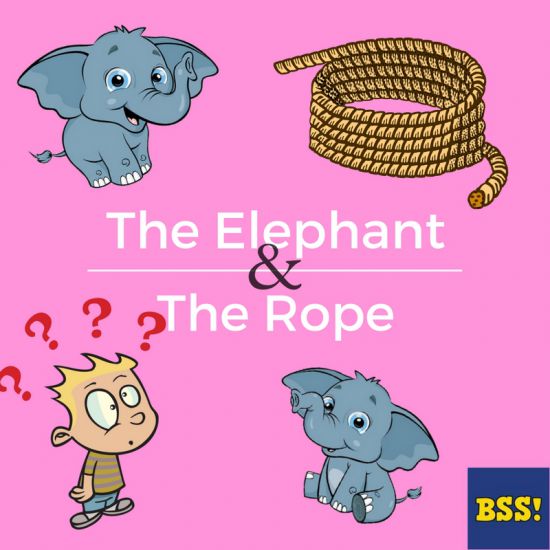 “It is obvious that any of them can break free at any moment,” the man thought as he observed the elephants. “Strangely enough they aren’t trying to run away? All they need is a tug and they’ll be free. And these circus people too, don’t seem too bothered about it.”

Just then, the man spotted a trainer. “I should ask him,” he decides. So, the man goes to the trainer and says, “This is really confusing. You see, these animals are so strong and yet none of them are trying to break free. And all of you are not even worried.”

Upon hearing such an interesting question, the trainer only smiled before he replied. “Of course, these elephants can run away if they want to. But they don’t. I haven’t seen a single one escape.”

“Well, you see, when these elephants are smaller we use similar kinds of ropes to tie them. Since they themselves are small and not too strong, the rope holds them in place making them unable to run away,” the trainer explained. “As a consequence when they grow up, the elephants believe that the ropes are enough to tie them. And the thought of running away never occurs to them.” You may also like to read, The Ant And The Dove.

Soon after that, the man returned home. As he walked back, all he could not stop thinking about the elephants and the ropes. It had to be the most baffling thing he had come across. “Imagine, you have the power to do something but you have no knowledge of it,” he kept thinking.

Then, all of sudden he says, “From today onwards, I will continue to do things as many times as I need to. I will believe in myself.” The elephants and their ropes had strangely given the man an immense amount of inspiration. Also, read Unity Is Strength.

Here is a visual depiction of the inspirational stories for students, “The Elephant And The Rope”. See the video story below,