This is one of the amazing Arabic stories for kids to read. The Sultan of Persia ruled a very rich Kingdom in Shiraz. His Kingdom was full of new and wonderful things.

One day, a traveler came to his court. The traveler was actually a very learned man. He had made a beautiful wooden horse that could fly. Everybody in the King’s court was amazed. “I will buy it from you! How much is it for?” demanded the Sultan. The traveler replied, “I will give it to you if you let me marry the Princess.” The Sultan and the Princess agreed. Also, read The Horse And The Snail. 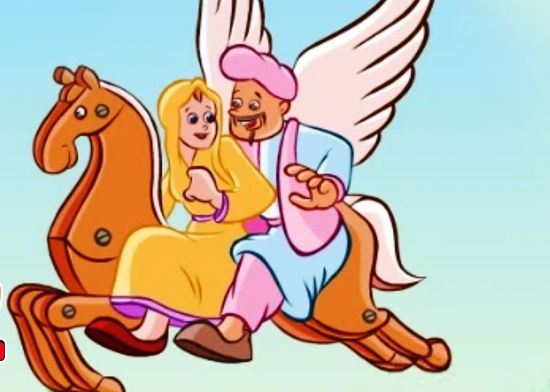 Image Source–> www.youtube.com. But Prince Firoz Shah became angry after listening to the traveler’s wish. “Before I buy this wonderful horse, I want my son, Firoz Shah to try riding it and see how it is!” said the Sultan. The traveler agreed. Without waiting for the instructions, the Prince climbed onto the horse and flew away.

However, the Prince did not return. After a while, everybody was very worried. They were convinced that the boy had met with an accident. Now, the worried Sultan grew angry. He blamed the traveler and threw him into the jail. But, the Prince had only lost his way.

After a few days, he came back to the Kingdom. Everybody was overjoyed and the traveler was released. Now, the traveler was very angry at being ill-treated by the Sultan and his subjects, He swore to teach them a good lesson and take his revenge.

One day, the Princess fell very ill. The King offered a big reward to anybody who could cure her.But, nobody in the Kingdom could make her feel fine again. The traveler decided that this was his chance. He disguised himself like a doctor and went to the palace. “I will cure the Princess,” he said to the Sultan. “Bring her and the enchanted horse to me,” he ordered. The Sultan did as he was told.

As everybody looked on, the traveler used some strange powder and quickly cured the Princess. At the same time, he lifted onto the enchanted, wooden horse and flew away before anybody realized what was happening. The Sultan was very angry but he could not do anything. The traveler finally got his revenge. He and the Princess flew far away and lived happily ever after. You may also like to read, The Horse And The Donkey.

Here is a visual depiction of one of the great Arabic stories for kids, “The Enchanted Horse”. See the video story below,