The Faith Of the Sparrow

This is an amazing Indian mythological story online. The battlefield of Kurukshetra was being prepared to facilitate the movement of mammoth armies with large cavalries. They used elephants to uproot trees and clear the ground. On one such tree, lived a sparrow, a mother of four young ones. As the tree was being knocked down, her nest landed on the ground along with her offspring, too young to fly, miraculously unharmed. The vulnerable and frightened sparrow looked around for help.

Just then she saw Krishna scanning the field with Arjuna. They were there to physically examine the battleground and devise a winning strategy before the onset of the war. She flapped her tiny wings with all her might to reach Krishna’s chariot. “Please save my children, Oh Krishna, ” the sparrow pleaded.” They will be crushed tomorrow when this battle starts. 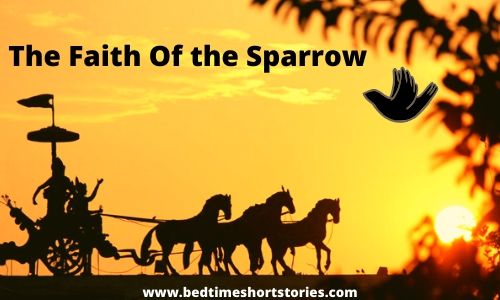 “I hear you,” said Krishna, the omniscient one, but I can’t interfere with the law of nature.” “All I know is that you are my savior, Oh Lord. I rest my children’s fate in your hands. You can kill them or you can save them, it’s up to you now,” the sparrow cried.

“The wheel of Time moves indiscriminately, ” Krishna spoke like an ordinary man implying that there wasn’t anything he could do about it. “I don’t know your philosophy,” the sparrow said with faith and reverence. “You are the wheel of time. That’s all I know. I surrender to thee.” “Stock food for three weeks in your nest then,” Krishna told the sparrow.

Unaware of the ongoing conversation, Arjuna was trying to shoo away the sparrow when Krishna smiled at the bird. She fluttered her wings a few minutes in obeisance and flew back to her nest.

Two days later, just before the boom of conchs announced the commencement of the battle, Krishna asked Arjuna for his bow and arrow. Arjuna was startled because Krishna vowed to not lift any weapon in the war. Besides, Arjuna believed that he was the best archer out there. “Order me, Lord,” he said with conviction, nothing impenetrable for my arrows.”

Quietly taking the bow from Arjuna, Krishna took aim at an elephant. But, instead of bringing the animal down, the arrow hit the bell around its neck, and sparks flew. Arjuna couldn’t contain his chuckle seeing that Krishna missed an easy mark. “Should I?” He offered.

Again ignoring his reaction, Krishna gave him back the bow and said that no further action was necessary. “But why did you shoot the elephant Keshav? Arjun asked. “Because this elephant had knocked down the tree sheltering that sparrow’s nest.” “Which sparrow?” Arjun exclaimed. “Also, the elephant is unhurt and alive. Only the bell is gone!” continued Krishna. Dismissing Arjuna’s questions, Krishna instructed him to blow his conch.

The war began, numerous lives were lost over the next eighteen days. The Pandavas won in the end. Once again, Krishna took Arjuna with him to navigate through the muddy field. Many corpses still lay there awaiting their funeral. The battleground was littered with severed limbs and heads, lifeless steeds and elephants.

Krishna stopped at a certain spot and looked down thoughtfully at an elephant-bell. “Arjuna,” he said, “will you lift this bell for me and put it aside?” The instruction, though simple, made little sense to Arjuna. After all, in the vast field where plenty of other things needed clearing, why would Krishna ask him to move an insignificant piece of metal out of the way? He looked at him questioningly. “Yes, this bell,” Krishna reiterated. “It’s the same bell that had come off the elephant’s neck I had shot at.”

Arjuna bent down to lift the heavy bell without another question. As soon as he lifted it though, his world changed, forever. Four young birds flew out one after another followed by a mother sparrow. The mother bird swirled in a circle around Krishna, circumambulating him in great joy. The one bell cleaved eighteen days ago had protected the entire family.

“Forgive me O Krishna, said Arjuna, “Seeing you in the human body and behaving like ordinary mortals, I had forgotten who you really are.” Also, read Ramayan Story.

MORAL OF THIS MYTHOLOGICAL STORY: PLEASE STAY UNDER THE BELL TILL IT IS LIFTED!