The Falcon And The Crow

This is one of the best short stories for kids online. Once upon a time, a big falcon lived on a high mountain rock. Near this high mountain rock, in the plains, lived a black crow. The crow lived in a large tree. Right below the tree, there lived many rabbits in their burrows. Every morning, they would come out of their burrows and play till the sunset.

One fine morning, the falcon came flying down upon a rabbit on the ground and caught hold of it with its beak. With the rabbit in his beak, he flew back to his nest on the mountain rock. The falcons are known for their aims and speeds. Also, read The Clever Falcon. 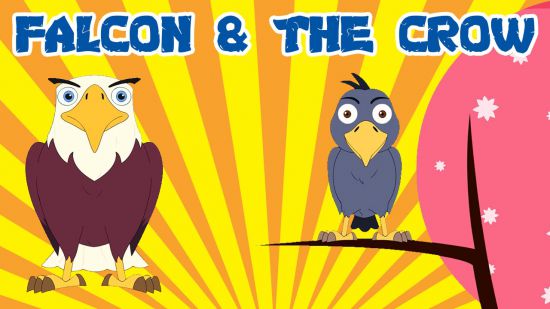 The black crow saw the falcon doing this and said to himself, “Wow! This is exciting!” He thought of doing the same thing. Thinking about how much fun this could be, the crow flew high up to the sky without thinking even once.

He then flew down with the great force upon a rabbit sitting on a ground. But, unluckily, his swoop was not correctly aimed at the rabbit. So, instead of catching a rabbit, the poor crow hit his head against the heavy rock. His head cracked and he immediately fell to the ground getting hurt really badly and he said a big “OUCH!”

The crow was lying near the rabbit’s burrow. One of the rabbits immediately rushed to help him. The crow realized how stupid he was to copy a big falcon. From that day, he decided never to copy others. You may also like to read, The Crows And The Oyster.

MORAL OF THE STORY: NEVER TRY TO COPY OTHERS IN A FOOLISH MANNER.

Here is a short visual depiction of one of the short stories for kids online “The Falcon And The Crow“. See the video story below,