This is one of the best short moral stories in english for kids. Once upon a time, a deer and a crow were great friends. One day, the crow saw the deer with a jackal. Jackals are known to be cunning animals. So, the crow warned his friend that the jackal could not be trusted. The deer obviously ignored the crow’s warning and went with the jackal to the fields. More awesome short stories for kids in english.

But, while roaming with a jackal, the deer got trapped. The jackal laughed at the deer and said, “Ahh! Now I am gonna call the farmer. Then he will kill you and I will get the share of your meat!” The deer was very hurt and frightened and so he cried. Also read, Self Help Is The Best Help. 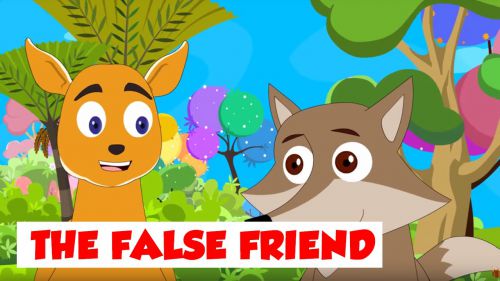 The crow heard his friend cries and came to help him. He asked the deer to pretend that he was dead. Soon, the farmer came as he heard the jackal’s howls. He saw a deer lying dead in his trap. He opened the trap to check. As soon as he opened the trap, the deer ran away.

The angry farmer hit the jackal and drove him away. You may also like, The Lazy Boy That Became A Cow.

MORAL: ALWAYS STAY AWAY FROM SUCH FALSE FRIENDS AND LISTEN TO THE PEOPLE WHO LOVES YOU.

Here is a visual depiction of one of the best moral stories in english, “The False Friend”. See the video story below,