The Farmer And The Seeds

This is one of the great bible stories for children. A long time ago, many people had gathered around Jesus to hear his words of wisdom. Jesus told the crowd a story about a farmer.

Jesus said, “Once upon a time, there was a farmer who walked up and down the fields while scattering seeds all around. The seeds fell at different places. Some fell on the path and the birds came and ate them up. Some fell on the rocks where the plants grew for a very short time and then died in the heat of the sun. Also, read Jesus Calms The Storm. 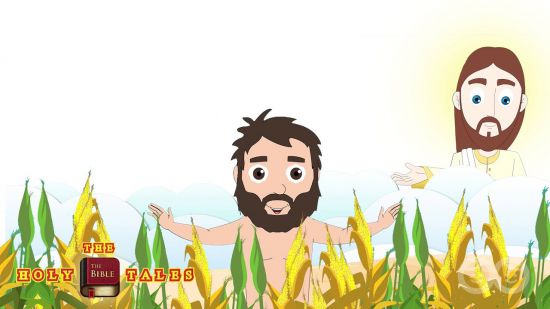 Some seeds fell on the thorns which grew faster than the plants. Thus, choking them completely. But some fell on good and rich fertile soil where they grew well, giving the farmer a good crop. This way, he could easily see the difference between the path, rocks, thorns, and rich fertile land.”

After finishing the story to the crowd, Jesus explained, “God’s words are like seeds. People often hear what God says but the devil earns their heart. So, the words are not able to enter their hearts!” He compared the shallow hearts of many men to the rocky ground which hears God’s words with joy but does not remember them for long.

He also compared the thorns with those people who hear the words of God but are much more interested in worldly things around them. And they slowly, over time forget the words of God. But there are some people who believed in God’s words. These people grow like the seeds on fertile soil, giving a strong and good harvest of faith. Goodness and lots of love are filled in their hearts. You may also like to read, Jesus And The Fishermen.

Here is a short visual depiction of one of the bible stories for children “The Farmer And The Seeds“. See the video story below,