The Fighting Goats And The Jackal

This is one of the amazing Panchatantra moral stories for childrens. Once upon a time, a hungry jackal happened to pass by a village.

As the jackal was passing by, he saw a huge crowd had gathered at a spot. “I wonder what is happening there,” the hungry jackal thought. Then, he heard the crowd clapping and jeering loudly. “Well,” the jackal thought, “it won’t hurt to find out what is going on there”. You may also like to read, The Fox And The Goat Story. 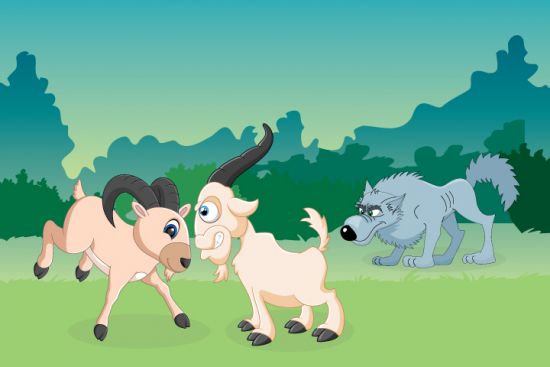 Image Source@ momjunction.com. So the jackal slowly crept behind the men in the crowd. After finally finding a good spot, the jackal sees two billy goats fighting. Both of the goats appeared to be strong and muscular. “These goats have been well fed,” the jackal thought. Just by looking at the two goats, the jackal’s mouth started watering.

But the jackal did not do anything. He simply stood hidden behind the many people in the crowd. From there, he enjoyed the fight. But this did not go on for long. The jackal noticed the blood on the ground. His greed started taking over him. He felt even hungrier than before. The jackal quietly closed the gap between him and the fighting rams.

But he still tried to control himself. Soon the jackal could neither control his hunger, nor his greed for blood. First, he began to lick the blood from the ground. At first, he was satisfied with the slight taste of warm blood. But that did not satisfy the jackal for long. Also, read Two Silly Goats.

As time passed, the jackal began to crawl closer and closer. His eyes set on the two muscular goats. After a point of time, all he could think was how tasty the two goats would taste. And how could the jackal eat the two of them at once?

Then, the jackal finally lost all his senses. And without thinking, he jumped on the two goats. Both of the goats were stronger than the jackal. They jumped and mercilessly trampled on the jackal until he was dead.

MORAL OF THE STORY: LOOK BEFORE YOU JUMP.