The Fisherman And His Flute

This is one of the great kids fables for kids to read. Once upon a time, there lived a fisherman. Now this fisherman had a talent with music. He was extremely skilled with his flute. This man was extremely well-known. 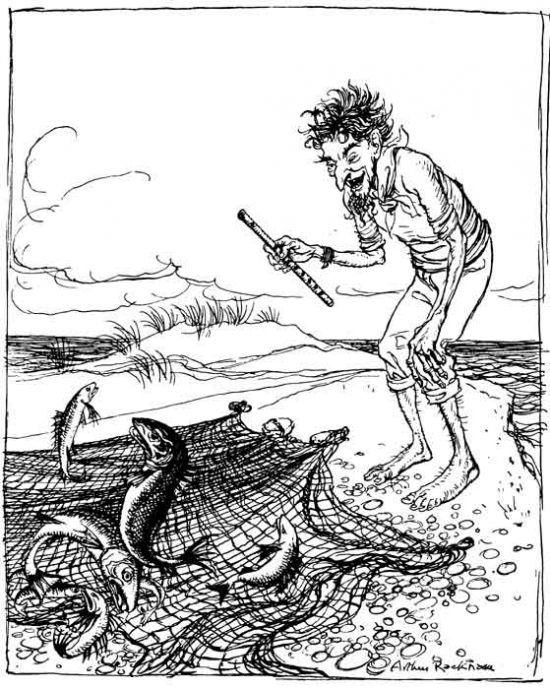 Image Source@ letsreadgreek.com. There, he put out a net in the sea. Then he found a protruding rock to stand on. Once he became comfortable in his spot, he started playing his flute. The melodious sound of his flute filled the air and the man enjoyed himself thoroughly.

“The melodious tune will attract the fishes to my net. And I’ll make good money out of them. The fishes would dance into the net after hearing this tune,” he thought. Unfortunately, nothing of that sort happened. When the man stopped and checked his net, he found that none of the fishes had come. This upset him greatly.

In the end, he decided to throw in the net in the old fashion way. To his surprise, he managed to catch a huge haul. “After trying with the flute and waiting, I finally catch some fish!” When the fisherman looked closely he found the fishes jumping around in the net, as if they were dancing. You may also like to read, The Fisherman And The Little Fish.

“Oh, my dear fish,” he said to them. “When I played for you, none of you jumped into the net. And now that I am not playing, you dance around?” That’s when he realized that the when he played the flute the fishes had not come to the net. And the ones that had, even they had lept out of the net. So, he realized certain things were meant to be done in a certain way.

MORAL OF KIDS FABLES: THERE ARE CERTAIN METHODS TO DO ALL THINGS IN THE WORLD. WE SHOULD STICK TO THOSE.