The Fisherman And His Wife

This is the short story of the fisherman and his wife. Not so long ago, lived a humble fisherman and his wife. They had a small filthy shack, really close to the sea. One day, while fishing, he caught a big, big flounder. “Let me go for I am an enchanted prince!” the flounder begged. The fisherman believed the talking fish and set it free. He went back home and told his wife what had happened. “Did you ask him for anything? At least for a little cottage for us to live in?” she asked right away. She argued and she argued that he had to go back. So even though he didn’t want to, he finally did. Also read, The Tale Of Three Fishes. 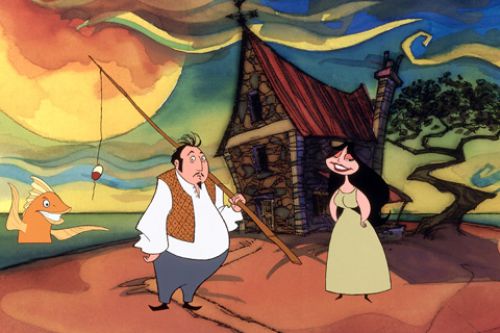 the fisherman and his wife Image Source–> @www.hboasia.com

He thought she’d be happy but his wife wasn’t happy at all. Now she wanted to be a king. So he walked back and spoke to the flounder again, and came back home to find her sitting on the throne. It wasn’t enough for her, she wanted more. She became the emperor and soon enough, the pope. But as she craved for more, one sleepless night she wished the ultimate wish- she wanted to be like a god. The fisherman wouldn’t do it but she argued more than ever.

As he walked to the sea, the nice wind turned into a storm. He called out to the flounder and told him her new demand. “Go home. She has everything she deserves now!” the flounder said. As the fisherman walked home, he saw their filthy shack back there. They still live there today, wishing they had asked for a little less.

Here is a visual depiction of  “The Fisherman And His Wife Story”. See the video story below,

The Fisherman And His Wife Story Video