This is The Flying Trunk Story for kids to read and has been adapted from the works of Hans Christian Andersen. Long ago, a businessman left his only son a huge inheritance. The rich businessman’s son had all the money and all sorts of riches. But the boy was foolish, he wasted away everything he had inherited on parties and games. In the end, the boy was left with a few shillings and some tattered clothes and slippers.

A friend of his sent the boy a trunk with a note that said, “Pack your things and leave”. With no other choice, the boy decided to leave. As the boy had no belongings left, he himself jumped into the trunk. Little had the boy known, that the trunk was a magical chest. Up and up he flew in the trunk, the enchanted trunk took him through the clouds, above the trees and housetops to the land of the Turks. 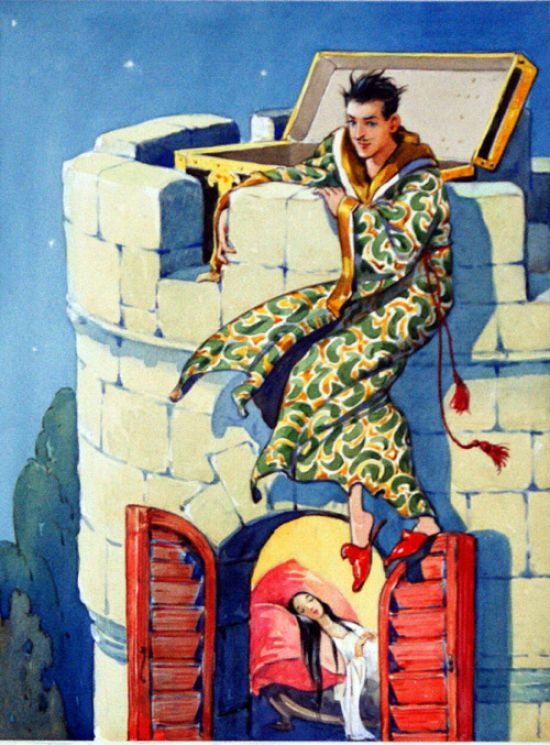 Image Source–> bookplace.com. The boy landed far away from the city, so as not to raise any suspicion. He roamed about the beautiful city. The boy could not help but notice a huge tower looming above the entire city. One day, the boy asked a woman who had been working in the fields about the tower. “Oh, that tower is for the Sultan’s daughter. She has been cursed,” the woman informed. “She cannot get married, it is said that she will not be happy if she were to marry anyone.”

That night, the boy visited the Sultan’s daughter in his magical trunk. With no problem, the boy made it to the tower’s balcony. When the princess sees the boy she becomes terrified. “Intruder!” she shouted. “Worry not, princess,” the boy spoke in a calm voice. “I am no intruder, but a prophet who came down from the sky.” The boy and the girl talk for hours. “You truly are beautiful,” the boy says to the princess.

Soon, the princess falls in love with the boy. She tells him to visit her on Saturday, as that was the day when her parents were coming to visit her. Tell them stories, the princess suggested, but I must warn you both mother and father like different sort of stories. Mother like educational stories with morals, whereas my father likes funny stories.

Saturday is a week away, the boy thought after he had left the princess’s tower. I can surely cook up a story. It was easier said than done. The boy roamed around thinking of a great story. Soon, it was Saturday and he had somehow pieced a story together. The princess had given him a sword as a present. The boy sold it off to buy grand clothes to look presentable in front of the Sultan and his wife. You may also like to read, The Very Vain Butterfly.

After greeting the Sultan and his wife, the boy began his story. “I will tell you the story of a certain kitchen where the argument of who is the noblest of all takes place. Now, there was a box of matches, which came from a majestic pine tree, ‘We are the noblest of all,’ they had announced. The other items began to argue.”

“They soon come to a conclusion. ‘We’ll overthrow the humans and take over their house,’ it was decided then,” the boy continued. “However, when the maid entered, none of them said a word. The maid goes about her work and strikes the matches. The matches thought that the whole kitchen would see their brilliance, but in the end, they die with their pride.”

The boy finished his story. The princess’s parents were impressed and agreed to marry their daughter to the prophet. The day of the wedding is settled. Soon, the day of the wedding arrives. Great feasts were prepared, and the whole city was decorated. To celebrate the day of his wedding the boy decides to buy some fireworks in large quantities. “I shall light up the whole sky with these fireworks,” he decides.

But as luck would have it, the terrible prophecy came true. The grand wedding never took place. For the flying trunk had caught fire while the boy was lighting the fireworks. The boy had fallen off the trunk and had barely saved his life. The boy could never make it back to the tower.

The poor princess waits for her bridegroom every day, but he could never get there without his flying trunk. So, he roamed from place to place and made a living out of telling wonderful stories to people. Also, read Aladdin And The Magic Lamp.

Here is a visual representation of, “The Flying Trunk Story“. See the video below.