This is an amazing humor story in english for kids to read online. Once, there lived a poor boy named Danny. He was an orphan. He used to work as a servant in the house of Mr. Roy. Danny was an honest and hard-working boy but sometimes, he did silly and foolish mistakes.

Once, Mr. Roy was getting his home painted. Danny asked him, “Sir, why are you getting your home painted?” Mr. Roy replied, “We are getting the house painted so that it looks beautiful.” Also, read The Cow On The Roof. 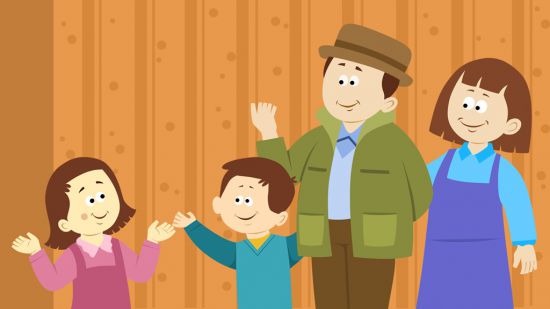 Image Source@ www.istorybooks.co. Some days later, Mrs. Roy told Danny to dress up her little daughter, Rosy for a party so that she looks beautiful. Foolish Danny painted the face of Rosy and said to Mrs. Roy, “The paint will make her look beautiful.” Mrs. Roy scolded Danny.

The other day, Mr. Roy gave an envelope to Danny and asked him to post it into a letterbox. Danny came back after two hours and told his master, “Sir, I could not drop the letter into the post box because it was locked. I tried to open it but I didn’t have its keys. So I brought this envelope back.” Mr. Roy got so angry that he didn’t talk to Danny for some days. Like this, Mr. and Mrs. Roy were always upset with Danny. Also, read The Frog Whose Belly Burst.

One day, Mr. Roy gave Danny a bottle of hair oil and asked him to oil his hair every day. Danny kept that bottle in his room. The next morning, after Danny took a bath, he opened the bottle and poured the liquid in his hair. That liquid was not hair oil but gum. Actually, gum was also kept there in the same kind of bottle.

After some time, Danny’s hair got stuck badly and he started crying. He went to Mr. Roy and said, “Sir, see what has happened to my hair! All this happened because of the oil you gave me yesterday.” Mr. Roy smelled his hair and started laughing loudly. He said, “You fool! This is gum, not hair oil!” Mr. Roy then took Danny to the Barber’s shop and got his head shaved off.

Danny got a lesson. He promised to himself and everyone that he will always be careful and alert while doing work. Also, read The Fly That Forgot It’s Name.

Don’t forget to check out the printable version of this humor story in english on Pinterest from here.

MORAL: ONE SHOULD ALWAYS BE CAREFUL AND ALERT.