This is one of the best kids moral stories. Deep in the jungle, buried among the trees was a pond. In that pond, many fishes lived. They were very happy there, they swam all day and enjoyed. Since it was situated within the forest, nobody came to bother them. Among the fishes, lived a crocodile. This crocodile kind hearted and did not bother the fishes even once. But he could not help but notice how arrogant the little fishes were. Also read, The Fisherman And The Little Fish.

One day the crocodile says to the fish, “It does not pay well to be overconfident and arrogant. It will only lead to troubles for you.” The fishes did not pay any heed to the kind crocodile’s words and ignored him completely by saying, “There he goes. Who does he think he is?” 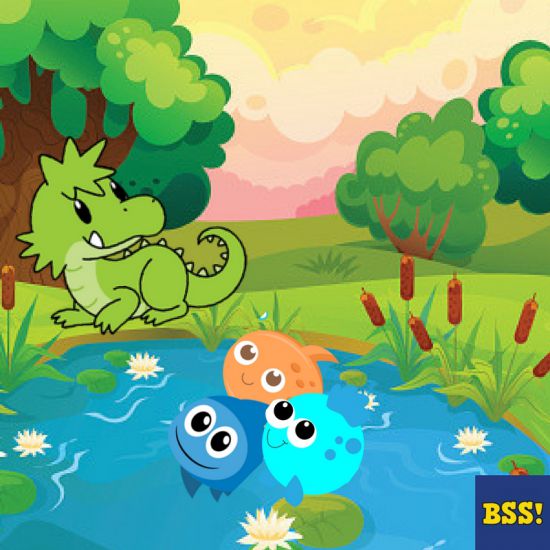 Then one day, when the crocodile had gotten out of the pond to rest beneath a tree, he heard a few footsteps approaching. Quickly, the crocodile hid among the leaves. From there he saw two men approach the pond. The men were extremely happy.

“Look! Look!,” one of them says. “There are countless healthy fishes!” The other one takes a look and becomes excited as well. “You’re right!” he exclaims, “We should come back tomorrow with are nets and other tools and catch them while we can!” After deciding on coming back the next day, the two men left.

Now, the crocodile had been watching the two men carefully. And he had heard the entire conversation. At once the crocodile hurried into the pond. “I have to warn the little fishes!” he thought. Slipping into the pond, he went straight to the fishes. “You all must flee,” the crocodile tells them. “Leave this pond before dawn. I overheard two fishermen who were talking about capturing you all!” You may also like to read, The Rainbow Fish Story.

The foolish fishes only laughed at the crocodile. “Oh, really?” they say. “Many fishermen have tried to catch us previously, but none could! Why should we bother now? Don’t worry about us crocodile, no one will be able to catch us!” The poor crocodile tried to convince them otherwise, but all was in vain.

Next morning, the fishermen came as promised. And they threw in their strong nets. The fishes swam around in a frenzy as the nets were large and strong. They tried and tried, but soon enough all were caught. It was only then that they realized how foolish they had been. “Only if we had listened to the crocodile. Our arrogance is the cause of all this!”

But, it was already too late. The fishes were caught and fishermen sold them the fish in the market at a great price! Also read, The Tale Of Three Fishes.

MORAL OF THE STORY: LISTEN TO ADVICE AND ACCEPT CORRECTION.

Here is a visual depiction of one of the kids moral stories“The Foolish Fish”. See the video story below,