The Foolish Monkey And The King

This is one of the great moral stories for children. Long, long ago, there lived a king who was very fond of monkeys. He had one favorite monkey who he kept very close to him like a friend. The king thought that the monkey was very clever and almost like a human being. When the king took rest in his room, the monkey used to sit beside him and looked after him as a bodyguard.

A few days later, the king went to the nearby forest to hunt animals and birds. When he came back after hunting, he was very tired and sleepy. So, that day he went to sleep early. He told his monkey, “Keep a watch around so that no one disturbs me while I sleep!” The monkey said, “Okay!” and sat beside the king and guarded him with a sword in his hand. You may also like, Monkey And The Cap Seller Story. 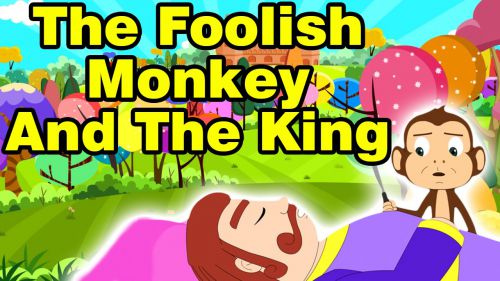 After a while, the monkey heard a fly buzzing around the room. The fly came nearer and nearer and finally sat on the face of the sleeping king. The monkey tried very hard to shew away the fly but it kept on buzzing over the king’s face. It flew and sat on his nose again and again.

Irritated and angry monkey said, “I am going to kill that fly!” So, when the fly sat on the king’s nose once again. he hit it with a sword. The fly flew away but the sword fell on the king’s nose and his nose was cut off. So, the poor king laid there on his bed without a nose.

MORAL: A WISE ENEMY IS BETTER THAN A FOOLISH FRIEND.

Here is a visual depiction of one of moral stories for children, “The Foolish Monkey And The King Story”. See the video story below,